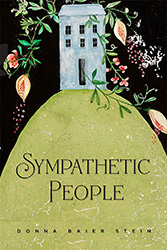 “What would life be without hunger?” The narrator in Donna Baier Stein’s short story “Coming Clean” asks a man with whom she has had an affair. Though the question comes in response to a declined lunch invitation, it speaks to a talent that Stein has mastered as both a poet and fiction writer – the double entendre.

Sympathetic People is Stein’s first collection of stories, but her work has previously been published in journals such as Prairie Schooner, The Literary Review, and Kansas Quarterly. An earlier version of her collection was a finalist for the Iowa Fiction Awards. In 2012, she published a poetry chapbook titled Sometimes You Sense the Difference.

In addition to writing fiction and poetry, Stein has been a direct marketing copywriter for more than 30 years, and she’s even written a textbook for McGraw Hill on the subject. Though one would expect prose written by a copywriter to be clean, direct, and Hemingway-esque, Stein’s writing challenges that notion. Her writing is breezy, but she does have a knack for the well-placed description. In addition, her skills as a poet shine especially in her character descriptions. One of the most striking images occurs in the story “Hindsight,” about young, intellectual couples in a sleepy, suburban town. Stein writes, “Her eyes looked like split pieces of rock quartz you could pick up off the ground at the quarry outside of town.” The description not only captures the character’s aura but also incorporates the Kansas setting and how much it influences the characters.

“Hindsight” is Carver-esque in the way that it probes small-town relationships and uses alcohol as a truth serum. One-liners are thrown like daggers in conversations that adults have in backyards during summer afternoons while the children play. This story brings up interesting questions about where we choose to invest our emotions and how the commitments we make won’t guarantee us any particular results.

Stein’s stories delight when she’s able to surprise the reader. In her story “Whatever You Want,” the narrator observes: “That was the first time falling in love made Rita laugh.” Laughter, a less-than-typical response to falling in love, is both intriguing and delighting.

Some of the characters throughout Stein’s collection appear in more than one story, but there’s not enough overlap to call Sympathetic People a linked collection. The reader won’t be able to expect whether or not a character will return in a later story.

In an attempt to capture a contemporary setting, some writers attempt to incorporate technology into their narratives. For example, the final chapter of Jennifer Egan’s novel A Visit from the Goon Squad is written in PowerPoint slides. Similarly, Stein uses a Facebook news feed in her aptly named “News Feed” to convey the story of a lonely character who connects with strangers from all over the world. Stein should be praised for experimenting with the Facebook news feed, which lends itself to narrative. However, Stein took a misstep by focusing the story’s turning point on a digital connection that even the protagonist had tried to ignore.

She was now up to 2,651. So when the News Feed scrolled, she saw messages from many people she didn’t know. She’d tried to remedy this by moving those she wanted to hear from into a Close Friends list and turning off notices from those she didn’t. But this was very time-consuming and most likely one of those jobs that would never be finished.

Scrolling down the feed that afternoon, she stumbled on a post from a man in India named Das Sen-Gupta. She didn’t know Das well at all, even by the somewhat low standards for intimacy set by Facebook.

Most Facebook users connect with people they already know, and it’s difficult to believe that the narrator would have connected with strangers. Furthermore, it’s nearly impossible to gather sympathy for a character the protagonist herself hardly wants to know. Reading about the minutiae of logging into Facebook was simply exhausting. Perhaps a reader less familiar with Facebook or more willing to forgo the story’s connection to real life would better enjoy “News Feed.”

In contrast, Stein’s story “Lambada,” takes place at a party, and she introduces so many characters that I found it difficult to connect with any particular one. Trying to keep track of who was who and who would remain important for the duration of the story is dizzying.

The star story in the collection is “My Lovers #1-5, or Why I Hate Kenny Rogers.” First of all, the first line is intriguing: “What follows is by way of explaining what happened last Sunday, when I had more of a brush with sex than I’ve had in the five years since my divorce.”

In “My Lovers #1-5…,” the narrator walks the reader through the major loves of her life, thus revealing information about herself. Stein’s story is reminiscent of Nick Hornby’s novel High Fidelity, which recounts the character’s top-five most memorable breakups. What is most lovable about Stein’s story, though, and what differentiates it from Hornby’s novel, is the very last line, which won’t be revealed here; it questions why we must maintain lists and what they tell us about ourselves.

Laryssa Wirstiuk is a writer and writing instructor in Jersey City, NJ, where she teaches writing/digital media at Rutgers University. Her work has been published or is forthcoming in IthacaLit, Hamilton Stone Review, The Stockholm Review of Literature, Barely South Review, and Up the Staircase Quarterly.