You are here: Home / Book Review / The Abridged History of Rainfall 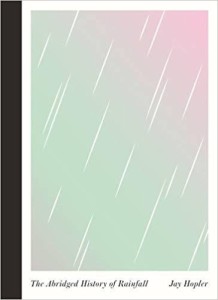 Jay Hopler’s second collection, The Abridged History of Rainfall, is a complex, highly stylized investigation of loss, memory, and the nature of language. Like Hopler’s first book, Green Squall, the landscape of South Florida is foregrounded.

The poems in The Abridged History of Rainfall continually reconsider themselves and their language. Some poems prefer to circumambulate their subjects, while others seem purposefully unfinished. Hopler, at times, even tells us directly, such as in “Eulogy (Currently in Revision)” that the poems haven’t—and never will—discover their final, complete forms. They exist, rather, as fragments of thought—broken ruins of unfinished tombs.

The most successful poems in the collection use this reconsideration of language to reify the actual world. Take the closing lines of “O, the Sadness Immaculate”:

From my window, I can see the house
Where Galileo invented the telescope.

I wonder what he was thinking
That night, that night he first searched
Heaven. I wonder what it was
He was trying not to see.

Galileo’s search is turned inside out. And, most importantly, the eye—the speaker looking from the window—remains still. The world is made real by the questioning of the world.

The inaccessible stars, the futile yearning to reach out of the self and see the natural world without the fog of human consciousness, brings up another important aspect of Hopler’s work—his debt to Stevens. While The Abridged History of Rainfall moves away from the more direct argument with Stevens Hopler engaged in in his first collection, Stevens still haunts these poems in their persistent investigation of the act of perception.

The anchor of the book is the long, eighteen-page poem “The Rooster King” that continually varies in tone, subject, addressee, and lineation. The poem opens with an epigram from the remarkable Johnny Cash song, “The Man Comes Around”—“Till Armageddon no Shalom, no Shalom / Then the father hen will call his chickens home.” The poem begins by juxtaposing the Florida spring with the speaker’s ache to die “badly.” The section ends with a rooster—presumably the rooster king or a rooster from his brood—“who cocks his throat. / And Crows,” introducing sound into the heretofore silent landscape. The poem begins to get into trouble when it starts to compare the crow to “Fat Sam,” the speakeasy boss from the 1976 British gangster musical Bugsy Malone. By sucking the crow of the rooster from the silent landscape to the—for lack of a better word—ridiculous landscape of a gangster musical the poem begins to feel “post-modern” for the sake of being “post-modern.” The poem almost corrects for this after a few section, but then “Fat Sam” is brought in again, this time with his own section title—“Fat Sam Is Dead.” My biggest gripe with the poem, however, is the section immediately following “Fat Sam is Dead,” “Today is Sunday, the Emptiest of Days.” The section, mostly in prose, opens with these lines:

Yesterday: manic. Today: subdued. To the west, thin wisps of cloud. Heidegger says, at the end of his “Letter on Humanism,” that “language is the language of Being, as clouds are the clouds of the sky.” I wonder what he meant by that. He also says “what is needed in the present world crisis is less philosophy, but more attentiveness in thinking.” Sitting on my front porch, in my blue rocking chair, looking at the trash-strewn street, the ramshackled shotgun shacks collapsing in the shadow of the overpass, I do not wonder for an instant what he meant by that.

Hopler is an absolute master of seamlessly bringing found texts—especially translations—into his work. He, in fact, does it brilliantly four pages later, in the final section of the poem where he introduces a poem by Gunter Grass. But this rolling out of Heidegger feels, to me, a little wanting. The “I wonder what he meant by that” makes the the rest of the first half of the paragraph seem like a ramble, an almost unnecessary preamble to the more interesting images of the second half of the paragraph. One of the most maddening aspect of this poem is that there is much greatness in it. One of my favorite lines of the whole book occurs in the “Fat Sam is Dead” section: “Why did you let them murder you? Now who will translate the wind into the language of the elderly / Women every time the sun strums his dumb / Harp?” Alas, gracefulness in language is not something that can fix this poem.

Despite the weaknesses of Hopler’s long poem, The Abridged History of Rainfall is an intense and—at times—deeply moving catalog of loss and and how it permeates even the quotidian, as Hopler reminds us in his poem “Epigraph” (page 45):

How many years I have done
This.

Last year when I did this,
My father was alive.

Jackson Holbert was born in eastern Washington and currently works as a librarian in College Station, Texas. His work has appeared in Poetry Northwest, The Greensboro Review, and Best New Poets.