You are here: Home / Book Review / The Absolute Gravedigger 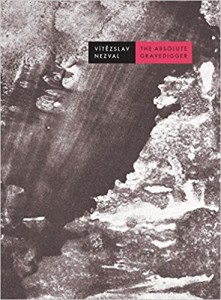 Vítězslav Nezval (1900-1958) dreamt of changelings; he saw mutations where others saw stability. Square-faced and amply jowled, and perhaps, like one of his subjects, “resembling / a crumpled hat from afar,” his visage could melt from essayist to poet and from artist to polemicist with a single inky gash across the page. He was a co-founder of a handful of artist’s collectives in Czechoslovakia in the 1920s, and they stretched their wings far enough to reach the humming depths of the Parisian avant-garde. Counting André Breton and Paul Éluard among their international peers, Nezval and his local associates founded The Surrealist Group of Czechoslovakia in 1934. They were one of the first Surrealist collectives outside of France and their journal Surrealismus sought to subvert not only the artistic but social standards of Central Europe with their projects and manifestos.

Like many surrealists, Nezval experimented with a curious form of printmaking called decalcomania, in which paint is applied to paper or glass and pressed, wet, onto another sheet or canvas. The resulting print features a uniquely cloudy, cauliflowered structure, which was utilized by artists such as Max Ernst, Óscar Domínguez and Hans Bellmer to achieve an otherworldly cragginess. At times reminiscent of stalagmites or mold, often with vein-like rivulets where air escaped between the two pressed sheets, decalcomania results in an unsettlingly biological image. Nezval’s prints, frequently rendered in brown and indigo tones like that of dried blood, mud and rust, look like nightmarish, dripping biopsies. They appear to investigate the inner capabilities of the body, like peeled detritus from a corporeal transformation.

While his prints are mesmerizing, Nezval’s poetry is celebrated as some of the best of the European avant-garde. First published in 1937, The Absolute Gravedigger is a masterfully lunatic work that showcases the powers of surrealism amidst a violently changing world. In his poems, all is manipulated, mutated and corrupted. Steeped in Salvador Dalí’s paranoic-critical method, Nezval’s works revel in a distrust of both form and state, fiendishly unveiling weaknesses in word and world. Like the “Absolute Gravedigger” in the collection’s title poem, Nezval is “a man of provident thoughts / Strewn like shoe soles across cemeteries.” He is “the great future / Of the shanks of a horse whose rider charges at / Pitchforks pulled from the granary of tomorrow.”

Poems accordion out like the folded tiers of a cadavre exquis, resembling at their conclusion a monstrous shadow of their original vision. His works function best when picked apart slowly: each line strays further from its previous imagery, resulting in decaying poems that are as much about their fantasy as they are about their corrosive process. Nezval’s craft is one of presentation and adulteration, delighting in the noxious corruptions each new line can offer.

The “Bizarre Town” suite of poems succinctly exemplifies this shapeshifting. Composed of 43 single-page sketches, “Bizarre Town” introduces a cast of local characters and locales that tiptoe into absurdity as they descend down the page. These poems can often be read in a single breath but Nezval’s distortions adopt a weight that warrants an incremental pause to marvel, repeatedly, at his pointed conjuring.

“An old man,” opens one poem, revealing a general but familiar face. “With a brown barrel,” it continues in a curious turn. “Wrapped / Around his waist” follow the next two lines; in a few blinks, a vision of a elderly cooper is now wearing his barrel. “Sits,” Nezval continues, and before one can work out the physics of sitting with a barrel around their midsection, the floorboards rot out and things get weird. Here’s the poem in its entirety:

With a brown barrel

On a red upholstered chair

On their hind legs

In “Bizarre Town,” the rat-barrel man lives alongside “A pharmacist / Tied to a bench / And guzzling / From a huge / Unstopped cask / White wine.” Elsewhere, “A hailstorm / Broke down the door / Of a café / Holding / A mass confession.” And rattling down the road, one can see:

“Bizarre Town” is a twisted sort of casting call, but it’s important to recognize its prophetic message and not simply be distracted by its devils. The final poem in the suite tells of bleeding condors “after attempted suicides,” “and the shadows / of naked men and naked women” who:

Tread in pools of blood

On the marble stairs

This ominous, political turn is developed further in the lengthy poem “The Iberian Fly,” which translators Stephan Delbos and Tereza Novická refer to as “Nezval’s Guernica.” In a blood-red sunset, an enormous fly stirs on a Pyrenean peak, “Whose body appeared to cover the entire Iberian peninsula.” Amidst maggots, spiders, and burning haystacks, “a little man with a Chaplin mustache” appears, releasing “rockets resembling peacock feathers.” While earlier poems began somewhere believable and ended in a nightmare, the introduction of Adolf Hitler to Nezval’s dreamscapes breaks apart whatever it was that divided these two worlds. Perhaps all of Nezval’s poems were warning of these developments, attempts to explain the real-life fissures opening between life and hell.

Rather than exploring the world’s potential descent into surrealism, perhaps these poisoned poems have been ominously heralding our future and unveiling the true nature of our present. Behold the Iberian fly, “Refreshed with old blood:”

Not just a poet, but a portent. Nezval’s surreal palette wrestles with the grotesqueries of the world, pressing together fantasy and truth to create an unsettling tableau. While his poems morph, often hideously, he maintains a deliberate grasp onto both sides of these transformations. In the Arcimboldo-esque “Man Composing a Self-Portrait out of Objects,” Nezval dreams of “corporeal phantasmagorias” but returns repeatedly to his suffering subject and his “troubling mental states.” Nezval proves that to be a master surrealist one must master both realms, fantasy and its bitter contradiction. Again, from the collection’s title poem:

For the absolute gravedigger to be what he is

And not just a man

To be the metaphysical mixer of the offal

Of the absolute cesspool

A gondola glides across

Made from the same substance of clouds

With his own opposite

Jeff Alford is a Brooklyn-based critic and book collector. He works as a gallery archivist and writes for Kirkus Reviews, Run Spot Run, and Rain Taxi Review of Books. Highlights from his library can be found at www.theoxenofthesun.com.