You are here: Home / Book Review / The Adventure of the Busts of Eva Perón 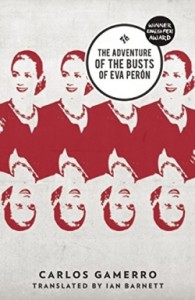 Carlos Gamerro’s surreal and very funny novel The Adventure of the Busts of Eva Perón follows the ambitious and idealist Ernesto Marroné on a blundering quest for respect and affirmation through the corporate world of Argentina. Guerillas have just kidnapped Marroné’s boss, Sr Tamerlán of Tamerlán & Sons, and Marroné can’t help but view the situation as an opportunity. Yearning for upward mobility, Marroné is confident that he’d be lavishly rewarded if he can facilitate the release of Tamerlán, and with this rosy-eyed certainty he agrees to take care of a particularly ridiculous ransom demand. The kidnappers insist that busts of Eva Perón be placed in all ninety-two rooms of the Tamerlán offices, and Marroné offers to coordinate their retrieval and installation. He sets off to the local plaster works, ignoring the many signs of what could go wrong with his task; he’s a devoted corporate yes-man and determined to be an executive.

Marroné traverses not only the distance between corporate Argentina and the Argentina of the people but wanders, thematically, through the country’s rich social history and through the history of literary adventures like his own. With a nod and salute towards Perónist Argentina and The Man from La Mancha, The Adventure of the Busts of Eva Perón is a novel about the intersection between realism and idealism.

Marroné reads every management book he can find, from the stalwart Seven Ways of Highly Effective People to Gamerro’s own creations like The Corporate Samurai and Don Quixote: The Executive-Errant. These books guide Marroné and help him (often with little success) interpret the world around him. In one scene, he tries to relate to a woman he meets reading Proust: “…it had something to do with memories,” he ponders, “But as far as he knew, there wasn’t a single business title along the lines of In Search of Lost Profits or In the Shadow of Young Markets in Bloom.”

Marroné frequently cites The Executive-Errant and the Quixote connections form a  thematic backbone to The Adventure of the Busts of Eva Perón. The Executive-Errant tells tales of how “our hero has travelled the ways of business, breaking down obstacles to free enterprise, tilting at challenges from the competition and confronting market giants, removing bureaucratic hurdles, and, above all, applying creative solutions to our ever-changing reality.” It’s a magnificently silly metaphor for Gamerro’s story, and one that allows a true Quixotic reading to creep in underneath the forced business analogies. Like Quixote and his library of chivalric tales, Marroné’s tomes have poisoned his mind into thinking he, too, might be a world-renowned businessman. He’s prone to daydreaming and self-mythologizing, determined that his tasks at hand are as monumental as a life-changing quest:

For it had not escaped Marroné’s notice that he was facing a decisive turning point, one that—with hindsight—would divide not only his career but his life into a before and after. Until today, he ventured to himself as he savoured the idea, he had merely been living; today perhaps he was beginning to write his autobiography.

While negotiating, executive-to-executive, with the boss of a factory that produces plaster statues, the factory workers announce a long-overdue strike demanding respect and compensation for the working class. Realizing his position places him somewhere on both sides, Marroné drifts between the party lines, from executive bacchanals to munitions gatherings and rallies. The factory floor is a wonderfully symbolic mess:

Marroné scoured the rubble in the vain hope of discovering a forgotten trove of chipped but still usable busts of Eva, but the nearest thing he found was a torso of Marilyn trying to push down her skirt to hide the fact that her legs were missing…. Marroné ran his eyes over the jumbled heap: cracked moldings, split columns, shattered amphorae, a legless David, a Discobolus whirling his stump, the masks of comedy and tragedy with missing jaws so you couldn’t tell which was which…

But Marroné remains confident these workers could be the ones to complete his Herculean order, as long as he is able to keep them focused and quell their uprising. Like Ignatius J. Reilly and the pants factory of A Confederacy of Dunces, Marroné oversteps workplace boundaries and begins to manage his strikers into a unified front:

If only he could find the room to do some creativity exercise with them… But which one? He could forget brainstorming or brain-sailing…. A mind-mapping exercising would be ideal, but he lacked the basic materials: an overhead projector to write on, a blackboard…

His team-building exercises are a success, but halfway through the novel, Gamerro abandons this goofy idealism in exchange for a sobering crack of reality: the government attempts to retake the factory, shots are fired and people are subsequently wounded. Marroné discovers the seriousness of his predicament, understands that “all of us have our 17th October in our lives, and his was knocking on the door.” His obsession with Evita metastasizes to something bigger than he can control: he unconsciously begins to filter his surroundings not through management books but through the idea of Evita and her power over the masses. He sees Perón and Evita as “the eternal couple—that work-team of the idealist and the realist (the very essence of Don Quixote and Sancho)” and feels he can spiritually relate to her. His mission was “nothing less than to carry the spirit of Eva, embodied in her busts, to the very heart of the corporation. For, being neither us nor them, he was the chosen one, predestined, belonging to both worlds. Like Eva, he was a bridge.” Amidst this newborn zealotry, Gamerro tumbles down an Evita rabbit-hole and shows Marroné wandering to Evita City, an Evita-themed sex club, and an enclave of impassioned, like-minded supporters.

Jeff Alford is a critic and book collector based in Brooklyn and is also the writer of the rare books and small press blog www.theoxenofthesun.com.