You are here: Home / Book Review / The Gods Are Dead 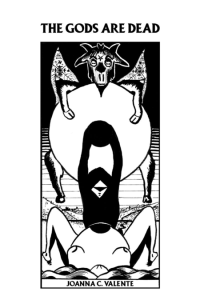 In Joanna C. Valente’s The Gods Are Dead, Tarot is combined with the themes of love, fear, sex, and existentialism. Transforming the idea of the Fool’s Journey—the Tarot’s metaphor for the journey through life—Valente’s 22 poems use the archetypal cards of the Major Arcana as a guideline for characters and thematic sentiments alike. Still, though using the Tarot as a basis for her poetry, Valente’s voice and anecdotes are decidedly genuine, creating a world of modern thought rooted in ancient ideas.

While the title of Valente’s anthology seems to send a clear message, the poems contradict the notion that the gods are dead. The entire book is filled with references beyond the Tarot, from the Abrahamic traditional God to Greek deities. The choice to use many different gods as a motif seems like a given, but Valente is able to depart from this obvious choice by playing down the way these gods are read in her poetry. While the mention of Dionysus in “The Hermit Used to Be the Guitarist in Your Favorite Band” is outright (the lines are, “descendants of / Dionysus”), the allusions to the Hebrew Bible in particular are subtle and consistent throughout The Gods Are Dead. The first line of poetry in the book is, after all, “He is the spirit,” and this motif is seen even within “The Hermit,” which begins, “For forty days, he lives in exile.” Even though they are frequent, these allusions and borrowed symbols are neither overbearing nor extravagant; only after reading the book a few times does the true emotional and symbolic gravity of the motifs set in. In this sense, Valente’s take on the Fool’s Journey becomes layered with allusions, only uncovered through a gratifying (though emotionally grueling) reading process.

Beyond the carefully chosen motifs, arguably the most defining quality of Valente’s poetry in The Gods Are Dead is the seamless convergence of the archaic with the contemporary. Titles like “The Empress Is the Main Attraction at Your Favorite Night Club” combined with typical images of the 22 Major Arcana (illustrated by Ted Chevalier) are enough proof of this. However, this convergence is just as clear in the poetry itself. An example of this is seen in “The Gods Make Love in The Tower,” when Valente writes: “Every place is somewhere else, his GPS / tells him. / How do women move? Asks Siri.” Though the beginning and end of the poem are not characterized by explicitly modern themes, the mention of things like Siri and a GPS do not seem out of place within the greater context of the entire book, which depends on this melding between ancient motifs and millennial sentiments—sentiments on relationships, love, and life in the modern world. This melding is further extended by Valente’s insertion of her own identity, which is at times clearly intertwined with her work. Probably the most obvious example of this is the poem entitled “The Sun Rises Over Manhattan & Sets in Brooklyn;” and though as a distant reader it can’t be said how much of the work is based on Valente’s life, the entire book exudes authenticity. This authenticity is, naturally, seen most often where the poetry is profoundly emotional, with lines like “I am dead as a forgotten / man, no mind / I am a broken vessel,” resonating as both moving and deeply unaffected.

This authenticity is also part of what makes Valente’s poetry so accessible to readers living in the digital age. The use of the Tarot and other gods as a channel for Valente’s personal ballads allows The Gods Are Dead to be at once classical and relatable, and because each of these elements is presented in a subtle way, Valente’s poetry additionally becomes easy to read (though not necessarily easy to swallow). As a physical object, Valente’s book functions simply but effectively, introducing the reader to a character visually before delving into a poetic profile of each of the 22 Major Arcana characters, which Valente takes care to develop as unique figures, rather than just archetypes. All elements combined, Valente’s book manages to at once take readers through archaic paths and connect with contemporary emotions and ideas.

Anahi Molina is a writing major at Loyola University New Orleans. She occasionally tweets at @anahianabye.