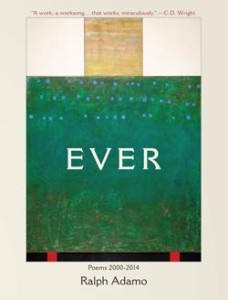 In the fourteen years since Ralph Adamo (former editor of The New Orleans Review) published his last collection, Waterblind (Portals Press, 2002), both the United States and Adamo’s native New Orleans have experienced epochal moments. From the political aftermath of the events of September 11, 2001, to Hurricane Katrina, to the various stock market crashes we’ve undergone, the specter of national and local catastrophes haunts Ever: Poems 2000 – 2014, Adamo’s new collection, out this year from Lavender Ink. A deeply felt meditation on friendship, love, loss, and mortality, Ever resolves most satisfyingly to the concrete, particularly in the beautifully rendered distillations of family life that form the emotional core of the collection. Unschooled yet allusive, rich with personal association yet aspiring to connect, steeped in the sociolect of New Orleans, Adamo’s new collection offers wisdom and compassion. It’s a long overdue triumph for its writer, one of New Orleans’ great underappreciated poets.

In the book’s first poem, “Ballets of Avoidance at Suppertime,” the speaker whispers lullabies into his daughter’s ear: “I whisper: My children are exhausting. / It helps her go to sleep.” The poem’s humor captures the pathos of raising children and serves as an overture for one of the major themes in the book: the gap between private anguish and public expression. As the poem develops, the whispered “lullabies” become increasingly complex: he has “no memory,” he tells her, and “the important moments have vanished / the trivial, too.”  Most parents can probably relate, but considering the author’s age—Adamo began publishing on Frank Stanford and C.D. Wright’s Lost Roads Press in the mid-1970s—and that other poems in the first section read like litanies of dead friends, the speaker’s anxiety about losing his memory nods towards deeper fears about aging, dying, and the creative process. As in any children’s story, death is always near:

I hear me whisper, As old
as the earth is, that’s
how much I love you, as
aromatic as the late summer
rain, as complete as your
grandfather’s sleep…

Recalling a ballad or a fairy tale, this passage attempts to reconcile the hopelessness that pervades life with the daily optimism raising children requires.  Sleep, which in the previous stanza suggested relief, here denotes death.

Many of the collection’s themes coalesce in the poems about Adamo’s brother, who, after being struck with fever at age three, suffered from aphasia—a condition that robs a person of his or her ability to communicate through language, without necessarily diminishing cognitive functioning. In “My Brother in His Institutional Room Longing for a Slice of Bread,” Adamo writes, “my brother the folksinger without a word / the silent blue of the day a roar / from lips bent only to kiss.” In the poem’s coda, Sunny Joe at the Track, we encounter what might be one of his brother’s folksongs, in rhymed couplets that evoke the rhythm of horses galloping: “he’s handicapped another winner, / will be eating steak for dinner.” While many of the poems in the collection refer to specific locations in New Orleans, Sunny Joe’s coda is especially evocative of the city’s geography, calling to mind the New Orleans Fairgrounds, which—even outside of Jazz Fest—is as particular to New Orleans as Bourbon Street.

The geography of New Orleans is constantly in danger of slipping away, much like the speaker’s memory, and the repeated references to loss—loss of friends, loss of memory—have a cumulative effect, suggesting the erosion of a cityscape. “The forgetting is ferocious and takes / all my time,” Adamo writes in “The Forgetting”; “and now I’ve started repeating the names of the dead / to myself, in my mind, over and again, I think so / I won’t forget which ones are dead and that they are.” The book enacts that repetition, as though poetry might prove ballast against the gradual deterioration of the speaker’s faculties, if not the disappearance of a time and place. While few poems directly reference Katrina, many evoke the aftermath of disaster:

The little house of my dead first wife
blows me a kiss as I go past
on wheels, the sidewalk cracks
one more lame joke to boot, and
then I am on the other side, again.

The speaker has crossed over and come back, bringing news, as if from the underworld. Now, he communes with the dead: “I hope this finds you well. It’s been too long, / I typed when you were already gone” he says, though his correspondent is no longer living.

The structural inequalities Hurricane Katrina laid bare in New Orleans define American life in the early 21st century—witness the Occupy movement, or Ferguson. So it is that these regionally specific poems are also quintessentially American poems. The most resonant political poetry in the collection—perhaps not surprisingly—is rooted in the personal. “What I’ve Learned in 45 Years of Working” is both funny and prosaic:

For some reason, my father saw it as fair—
the whole American thing—(or at least he didn’t complain)

and if I could visit him right now
that would be the first question I’d
unleash, among the many more compelling ones

because I’d like to know what working every
working day from 14 to 63 did for him
as it did not produce more than
sometimes adequate income. Was it dignity, for g’d’sake?
Work came first—he was proud of work
(an odd blind spot? a healing compromise? his own
important piece of the ‘truth,’ that damn
intruder on reality…How much is the
truth like music? especially song? at all?)

Suffice to say, poetry constitutes its own kind of work, and throughout the collection, we are reminded of the travail of composition and the labor involved in shoring up the mind against forgetting. If poetry doesn’t offer us “truth,” it perhaps offers a “healing compromise”—and that song, finally, constitutes the news Adamo’s speaker brings us from the other side.

Told as if through a fog of PTSD, evoking the subjectivity of childhood, which it posits (in the case of Adamo’s brother) as infinite otherness, obsessed with the risk of losing the dead all over again as we forget them, Ever runs the risk of drowning beneath the weight of its own themes. Yet rather than ending with any grand statement about mortality or love, the first poem in the collection, “Ballets of Avoidance at Suppertime,” concludes with a scene of family life that evokes the cosmos:

Lily is reading Cat in the Hat
to her little bronze snails and frogs,
while Jack makes stars for a universe
he is creating, claiming as he does
the stars’ve begun spontaneous
propagation, and the Cat is
making the stars dizzy, says
Jack to Lily, while our organic
black cat Bear chases litters
of Jack’s stars across the floor.

The poem weds the mysterious to the mundane. The private world of childhood—which elsewhere seems a prison—becomes a world of renewed wonder. In propagation, as in imagination, we remake the world.

In forty years, Ralph Adamo has produced a handful of books: two titles from Lost Roads, Hanoi Rose from the New Orleans Poetry Journal Press, Waterblind, and now, Ever. As a member of the New Orleans poetry community, he’s been a friend and mentor to younger writers, including the reviewer. One might most readily group him with the Southern avant-garde of the 1970s, lyric poets like Frank Stanford, who made great claims for poetry as expression and metaphysical vehicle (it can help us talk to the dead), even as they incorporated the innovations of the Language poets and the historical avant-garde. In many respects, Adamo is a survivor: both Stanford and Everette Maddox, another semi-famous poet-friend, died young. Think of Ever as an epitaph for a small movement whose influence continues to ripple out into the wider community of American poetry. Think of it as a song for New Orleans at the dawn of the 21st century. Think of it as an American book, one that so deeply inhabits a particular time and place that it stands to tell us more with each passing year.

Tom Andes’s  fiction has been published (or is forthcoming)  in magazines including Witness, Natural Bridge, Blue Earth Review, the Akashic Books Mondays Are Murder Flash Fiction Blog, and in Best American Mystery Stories 2012. His reviews have appeared in The Rumpus. He lives in New Orleans.