You are here: Home / Book Review / The Hidden Letters of Velta B 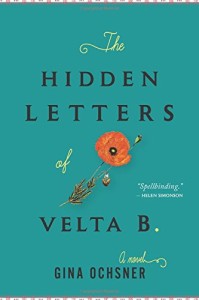 The years following the collapse of the Soviet Union in 1991 saw immense shifts in nearly every aspect of human life. Without the ideological guidance of the Soviet system, communities across Eurasia, from the Pamirs to the Baltics, faced the equally intoxicating and depressing prospects of cultural renewal. This period saw new forms of sexual revolutionaries, entrepreneurial opportunists, and nationalist specters all come out of the Communist closet to cope with free market economics and a sense of ethnic identity frozen in amber for decades. If anything hallmarks this under-described period in history, it is reorientation of identities a post-Communist world, based upon a mixture of liberal reforms and a harking back to old national and personal histories often indistinguishable from myth.

Gina Ochsner’s fabulist novel The Hidden Letters of Velta B. captures the slow, creeping violence and elation of those times. In a viva voce narrative, the central character, Inara, recounts her life in a small riverine Latvian town to her only son, Maris. Inara’s days are numbered and thus she feels she must relate her own version of family history, interwoven as it is with the unspoken history of the town, where people did unspeakable thing to each other during the Soviet years and then were forced to live together after its demise. She must also explain to Maris the significance of his most unusual physiological trait: his ears, with which he can hear the haunting secrets everyone wants to forget. “The ground spoke to you,” Inara tells her son, “and you couldn’t help but hear the soil’s slow heave of stones. You heard the triumph of each slender blade of grass spearing up through the mud and the restless dreams of the dead.”

As with most novels centered in towns, it is the subplots that drive the plot of Velta B. In the walls of the family’s abandoned manor house, Inara discovers a cache of coded letters written by her maternal grandmother, Velta, to her grandfather, who had been banished to a work camp during the Soviet invasion of Latvia. The family’s Jewish neighbors are regional chess champions who inspire a sense of awe and detestation around the town. Uncle Maris (after whom young Maris is named) is a brilliant but deeply flawed inventor whose staggering betrayal of the family sets off a chain reaction of irresolvable events. The Zetsches, a wealthy German-Latvian couple who aim to take control of the town’s future, become the objects of a renewed blood-and-soil nationalism emerging from unemployed men in bars. Young Maris begins writing a Book of Wonder, filled with passages of reflection on the physical wonders of life and the world, in a mystical-scientific way. Inara’s father tends the town cemetery, which is ordered removed to a different plot by Mr. Zetsche, who is building a Riviera to revitalize the town. Maris gains access to Velta’s hidden letters and decodes them as part of a history fair, forcing the town to hear details of their pasts they would rather had forgotten. “If it had so happened that a woman such as the neighbor woman had been brutalized,” Velta wrote in a letter to her husband in exile,”‘then we might tear our hair out in anger, might slit our wrists in shame. As it is, my dear, the birds still sing, and to my ear, the plainer-plumaged wrens sing the sweeter song.”

Just as it was difficult, in 1993, to say where Latvia and other former Soviet states were going, it can be difficult to find exactly what is at the center of this novel. Maris has no way to discern from his dying mother’s narrative what is history from what is myth, just as Inara had no way to make such distinctions from Velta’s letters. Inara may be speaking in just the same poetic code her grandmother used to disguise and turn away from a past too painful to face directly.  This is the book’s tragic and compelling secret: that history has no center. And painful history telling is also, inevitably, the process of refashioning the shards into something somehow better. The overlap of history and mythology, of the living and the dead, is also the conflict between progress and tradition, the conservation of the past and its secrets with development for jobs and progress. Mr. Zetsche has no interest in history or the past, only in progress and the future. The young men of the town, who need jobs the worst, are also the nationalist voices calling for tradition and Latvia-for-Latvians. “Mrs. Z. reached beneath her chair,” Inara recalls, “and produced a brick wrapped in a green sheet of paper.  I recognized the slogan blazing across the paper: Patriotic Latvians For An All-Latvian Latvia.”

Despite its dark appearances, Velta B. is written in a wondrous, occasionally whimsical style akin to some of the Orthodox Fathers, who were aware that miracles were possible, and that tragedies both reveal our vulnerabilities and a need to understand the reasoning behind them. It is also a style of perseverance, perhaps the single quality shared by all the characters in this novel. And it is also a style of optimism, in spite of the many optimistic ventures the novel sees through to nothing, or at least into the unknown. In just this way, Inara makes the connection between reading Velta’s letters and a story she heard from her Jewish neighbor, about a boy who climbed inside a rabbi’s mirror: the crossing of the threshold from the ordinary here and now, into the mysteries of the past. Or, into a universe made not of atoms, but of stories.

Aram Yardumian is a Tbilisi-based researcher into Caucasus population histories.