You are here: Home / Book Review / The Leftovers 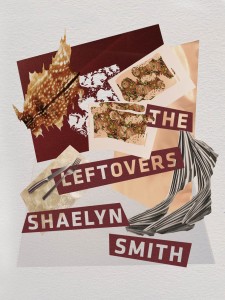 There are tons of reasons to read art criticism: you can learn about culture, formulate arguments, or anxiously over-prepare for a Tinder date with a Dada enthusiast. It’s not as likely, however, that you read criticism for its poetic beauty or experimental form. Too often, art criticism probes and analyzes aesthetics while employing unbearably dull language to quarrel about the art. Shaelyn Smith’s The Leftovers—which examines and criticizes Judy Chicago’s 1974 installation The Dinner Party—defies those bummer tendencies towards inaccessibility and scholarly stuffiness. The Leftovers endeavors to create beauty as it examines beauty; it places an academic form in the same poetic space that art occupies; it includes lines like, “To surrender to love is to be vulnerable to appetite.” 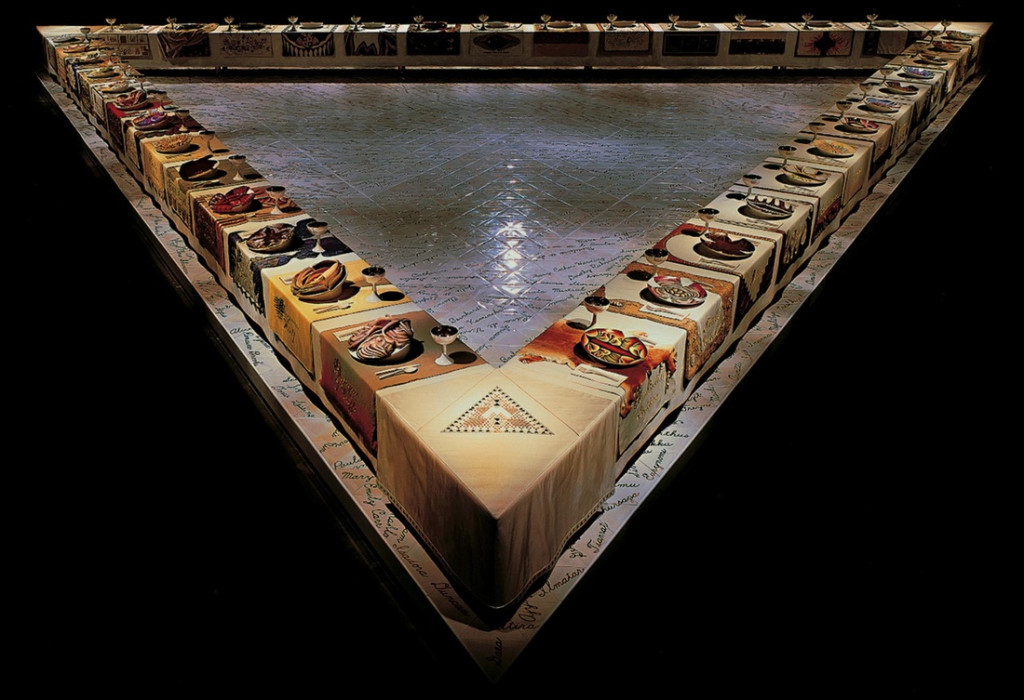 Chicago’s The Dinner Party is a triangular table set with 39 places. Each side of the triangle measures 48 feet, about as long as the Hollywood Sign is tall. The place settings include ceramic plates and handmade tablecloths that double as tapestries. Each setting celebrates one historical or mythical woman. The shape of almost every plate on the table mimics an intricately detailed vagina. The installation is famous for its commemoration of womanhood.

When Smith describes the piece’s creation, her command of beauty infuses what might otherwise be excessively dry-ass exposition. Smith writes that “in 1974, Judy Chicago said fuck all that, threw her gloves aside, and bare-knuckled a knockout. She got to work on The Dinner Party, which she hoped would end the occlusion of women’s achievements from the historical record.” The Leftovers uses the same poetic touch to detail the rest of Chicago’s process and many early critical reactions to the piece, but the text also resists a linear approach to this narrative. Instead of assembling a tidy list of points about feminist art, Smith constructs The Leftovers as though she is piling literal leftovers on a plate. The text shoves memoir, food anthropology, prose poetry, and biography together so that they intermingle like microwaved chicken and rice. The Dinner Party’s story is told out of order, with chunky digressions woven through analyses of the piece.

In the strongest section of the book, Smith uses eclectic form to pivot from The Dinner Party to a series of prose poems that explore the voices of women featured in the installation. First, Smith establishes that Sojourner Truth is the only black woman to have a place setting and that Truth’s setting is the only one that excludes vaginal imagery. Then, in a poem, Sojourner Truth “explains the idea of intersectionality, and those around her begin to weep at the twinning natures of oppression. She already knows they won’t stay long.”  These lines are studded on either side with stories of murdered trans women who have also experienced the horror of “twinning natures of oppression.” When one woman—Yaz’min Shancez—“disappears, the police use the wrong name and pronoun. So do most of the newspapers. They refuse to consider this a hate crime…” Smith knits more tales of murdered, formerly anonymous women into the lives of Emily Dickinson, Virginia Woolf, Sacajawea, and others. The text highlights the marginalization and frustrations that many different types of women have in common while ensuring that each voice remains distinct.

Smith also utilizes marginalization when she delves into food anthropology. Her food writing often riffs on how divergent classes of Americans eat: for instance, stark descriptions of prisoners’ last meals contrast with decadent accounts of fine dining in New York. Smith, a former chef, recalls the types of food she prepared for privileged tables: “In the kitchen, we gently fry milt with brown butter and capers, splash it with lemon and parsley, slide it onto toast. We cut roe sacs out of whole fish, their glossy eyes staring up at our faces, the faces of executioners.” Smith retools the concept of a dinner party as a vessel for wealth, the prison-industrial complex, the gory physicality of meat, and a fistful of other stray observations.

Speaking of stray observations: Smith’s ability to stitch disparate forms and subjects into a cohesive table setting is one of the most impressive aspects of The Leftovers, but she sometimes meanders too far off course. A portion of the text explores crime in her hometown. These anecdotes are rich with symbolism (man-eating pigs and mysterious bullet scars are featured prominently) but they disrupt the book’s improvisational balancing act with a distracting question: How much true crime belongs in The Leftovers, especially if that topic barely intersects with themes of art, eating, or the lives of famous artists and culturally significant women? Sometimes, a plate of leftovers features foods that we strive to keep separate. They touch anyway. The watery, off-white, macaroni salad drippings might end up soaking the edge of a hamburger bun. Does that ruin the whole plate?

Maybe. Though Smith’s tangential style can distract, it also pushes boundaries between genres and forms while questioning the differences between life and art. Are art and life separate endeavors, or are they a tangled mass of inextricable experiences? What separates the food that prisoners eat from the food that the wealthy eat, and how does this relate to The Dinner Party and its seclusion in a sterile room at the Brooklyn Museum? Should the art be confined to its temperature-controlled chamber or should it be allowed to touch the man-eating pigs and the marginalized women who aren’t represented in Chicago’s work? By destroying and rebuilding the neat grid that divides these concepts, Smith urges the reader to celebrate the idea that “all representation leaves something behind. It’s up to us to pick up the leftovers.”

Diana Valenzuela is an undergraduate English major at the Loyola University New Orleans.