You are here: Home / Book Review / The Listeners 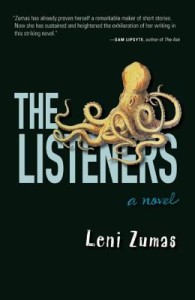 In Leni Zumas’ debut novel, The Listeners, the narrator Quinn suffers the loss of her older sister—shot in her sleep after they switched places in a shared bed. Quinn cannot move beyond her absent sister, cannot comport in an adult world, even as she narrates from well into her thirties. Quinn’s point-of-view is all mess and all suffering. The novel prompts a general question: Is suffering more compelling to us as readers? And not just externally imposed suffering, but suffering which characters themselves are partly responsible for—such that the story is not so much plot as the development of a suffering consciousness?

Happy love has no time. I recall a writing professor once saying this. If characters are already happy and in love, he reasoned, the invisible clock of fiction does not tick. This struck me as pessimistic and quite possibly true. (I was working on a chapter of my own novel where two lovers were sequestered in a mountain cabin and I was throwing every available wrench to provide some restraint and conflict.) Consider the Garden of Eden. Adam and Eve have it made in the shade until they get hungry and curious. To fix their sinful situation, a whole bible is written. Wars ensue. Plagues occur. Matzo is invented. With no bite of the apple there’d be no suffering, and no story. Say Odysseus tells Penelope he’ll stay home from this voyage. The Odyssey might become a Mediterranean cookbook. Sure, the guy philanders along the way but he also suffers enough for ten men. And when he returns he gets dissed by a flock of suitors knocking down his wife’s door.

Samuel Beckett once said, “To find a form that accommodates the mess, that is the task of the artist now.” Such messes often include suffering—and perhaps through characters’ suffering points-of-view we enter the story. Today’s world seems over-filled with happy love. Or at least images of it. Check the commercials. Check the billboards. Check Facebook. It’s a world with only a “like” button to gauge your accomplishments, your best-looking photos, your mountain romances. All the rest is tossed aside—nowhere to accommodate the mess. But if all is well, all is not narrative.

The suffering in The Listeners occurs especially through synesthesia, a blending of the senses, that Quinn shares with her sister. Synesthesia is generally a brief ontogenic phase. As we develop, our experiences become literal and reliable, our sensory information aligned with the expected sense. Not so for Quinn in The Listeners. Quinn can’t put things into their discrete categories: “the pain was veiny brown,” or “it sounded like a field of circles with tiny black dots.” She also matches notes to colors in her indie-rock vocals: “My melodies (what passed for them) were blue or silver or bruise…if a note was wrong, the color would be wrong.”

Quinn cannot grow up, even when her music career ends in a post-pop-partum van crash. Her synesthesia persists over the course of the novel, as does her haunting childhood memories of her sister. Even with her own synesthesia, Quinn’s sister had been better adjusted and fitter for the world of definable categories. “I liked when my parents said girls because it made me as much of a girl as my sister,” Quinn narrates, “who was more girl.”

And though Quinn narrates from her mid-thirties, she remains in stasis, her synesthesia individuating and isolating her, enwombing her point-of-view. She touches a lit cigarette to her shoulder and tells us, “My burning skin had smelled horse-mouth gray.” From a reader’s standpoint, we pay attention to Quinn’s strange, surprising, and defamiliarized narration. The novel’s cross-sensual descriptions constitute much of the best writing.

In part, we root for Quinn to succeed in the quotidian world she lumbers painfully through. If she weren’t slowed by her synesthesia, maybe she would grow up and come of age. It’s easy to see she is suffering. Walking her hometown streets, Quinn says: “I’d been a baby here; my childish lungfuls had been of this air; and here I had become some mock version of adult. I creaked like one, had the scuffed look of one; but indoors, I was not much better than fifteen.” But would we prefer a well-adjusted Quinn? Do we want characters to fall in line and submit to acculturation?

Near the end of the book, her synesthesia appears to diminish. In a non-synesthetic landscape description, Quinn says, “All the colors were dark: blues, greens, grays, browns, each hue muted and low to the ground.” There’s normalization and the assuaging of Quinn’s sisterly loss. It may be a breakthrough for her, but troubling for readers—as though the story itself would dissolve if Quinn were no longer synesthetic. So do we prefer that she suffer in some perpetual adolescence? Maybe so.

In their book The World of the Newborn, Daphne and Charles Maurer describe the synesthesia of babies. “His world smells to him much as our world smells to us,” they write, “but he does not perceive odors as coming through his nose alone. He hears odors, and sees odors, and feels them too…if we could visit the newborn’s world, we would think ourselves inside a hallucinogenic perfumery.” Babies experience the world cross-sensually and their perceptions slowly conform. Smells are just smells, sounds are just sounds, and so forth. They learn to experience everything in the correct ways in a slow crawl toward happy love, and happy Facebook posts, which are boring and non-narrative.

In fiction, perhaps we prefer hallucinogenic perfumery, the mess of suffering. We spend too much time trying to get things right and avoid suffering in our own lives; when a character gets things wrong, or suffers, we pay attention, whether through catharsis, schadenfreude, or empathy. So long as we don’t see authorial machinations or obvious exploitation, suffering can stamp the fiction we gravitate toward—from the greatest story ever told to the latest story ever told.

When a friend recently read my novel manuscript, he commented: “You really didn’t let your characters be happy.” I’ll take that as a compliment, whether he meant it that way or not. In The Listeners, brief moments of happiness or levity turn the narrative gaze back on the readers and ask us plainly: what do we want in our fiction? What do we want in ourselves?