You are here: Home / Book Review / The Marble Army 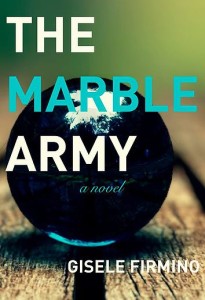 Set in Brazil during the years following the military coup of April 1964, Gisele Firmino’s first novel, The Marble Army, is about a family trying to maintain dignity in a society corrupted by a repressive government. The central character, Luca Fonte, is a young boy who watches as first his father and then his older brother are changed by the coup. Like many, the Fonte family does not want to become involved in politics – they want to spend time with their friends and families, be respected, fall in love, grow up. But a government run by ruthless men seeking their own gain and glory damages everyone. Antonio Fonte, the father, is affected first, losing his position at the local mine, which forces him to move his family away from all they’ve known. Then the older son, Pablo, decides to join a group of students protesting the government and disappears, seemingly a victim of a government that censored all debate. Luca doesn’t care about politics, but he does care about his brother. He must forge his own response to an unbearable situation to find his brother.

Firmino spends little time showing the political context, focusing instead on its effects on the Fonte family. In 1964, Brazil’s military forced out the elected president, João Goulart, shortly after he instituted rent controls and agricultural reform that many perceived as a threat to international trade and support for global communism. The United States recognized the new government, some allege encouraged it, lauding the military takeover as a victory of democratic forces over communism. Competing factions within the new Brazil soon led to control by authoritarian military leaders whose goal seemed to be the extermination of dissent and pro-communist influences.

Firmino’s novel begins after the coup, in Minas do Leão, a remote town little affected by the military’s takeover. The first hint of the changes to come occurs when the state governor, a friend of Antonio Fonte, does not attend the party dedicating a new street: Rua Antonio Fonte. Antonio knows what his family does not, that the governor had been one of the first to be labeled an enemy of Brazil. The isolation of Minas do Leão doesn’t last, however. Slowly, inevitably, the military coup takes over the lives of common people, expanding “like the grayish-green mold you’d see on the outside walls of your home, knowing that it will eventually creep into the interior.” It creeps into Minas do Leão when Antonio, as a matter of principle, refuses to act as a spy against the mine workers he supervises.

This is Luca’s story, but the novel uses a shifting third-person point of view that allows readers to observe what Luca can’t know: Pablo’s and Rita’s relationship, Antonio’s decision to refuse the military government’s offer to remain a mine supervisor, the torture of dissidents. Luca’s initial anger at his father’s decision to move the family from Minas do Leão and at Pablo’s evening activities seem immature when put side by side with the world Antonio and Pablo face and the immense injustices surrounding them. Luca is a young boy growing up amidst circumstances he is just beginning to understand. Much of the insight into events in which Luca did not participate comes from the insight of the older Luca, reflecting on what might have happened. This gives the novel a sense of perspective that a linear first-person account would not.

Firmino’s writing style is deceptively simple. Her straightforward, formal prose contains moments of metaphor, such as the image of the mold creeping into the house, as well as stinging, understated, social commentary. Bits of Portuguese give the novel its firm sense of place. An example that shows her mastery of craft, as well as her humor, is when Luca, dressed in his older brother’s shirt, decides to follow his brother’s example of protesting the government by spray-painting graffiti along a wall. He considers hiding behind a dusty, abandoned car: “A thick layer of dust covered the entire thing, and someone had written on its back window what looked to be ‘ABAIXO A DITADURA’ [down with the dictatorship] and a ‘WASH ME’ right below. But it was already being buried under even more dust.” These two short sentences take on layers of meaning, including a foreboding sense of the ineffectiveness of protest in the face of time and inattention, shown by the accumulation of dust.

There is much honest ambiguity in The Marble Army: what is heroic and what is foolhardy, and what is the cost of defiance? Luca’s mother throughout the novel tries to ignore the changes in her country and in her family, focusing on maintaining what consistency she can by blinding herself to what is happening around her, wanting to return to Minas do Leão, the only place any of them think of as home. Antonio’s moral stance drives his family from their home and social position; Pablo’s student group’s actions leads to their torture, their only weapon being graffiti and pockets full of marbles thrown to keep police from pursuit. And yet, despite all these hardships and compromised choices, the resistors show a nobility of spirit lacking in those who accept or further the repressive government, their protests becoming “a wave of resilience, of innocence and faith.” Ultimately this novel presents an honest confrontation between hope and the excesses of power, and a refusal to succumb to despair.

Patricia Boomsma is an Arizona lawyer with an MFA from Queens University in Charlotte. She published a scholarly article on John Fowles’ Daniel Martin in The Journal of Modern Literature and is currently working on a novel set in 12th century England, Portugal, and Spain.