You are here: Home / Book Review / The Pedestrians 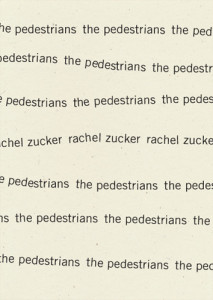 “How can any mother write an epic?” asks Rachel Zucker in her most recent poetry collection, The Pedestrians. Filled with fables, dreams, and ruminations, the book quivers with the anxiety of acting as both parent and artist. “I’m so terribly interruptible,” Zucker writes of her epic-writing prospects, echoing the conflict of which artists—especially male artists—have complained for centuries: that family life and art-making seem at odds. How can one access truth, beauty, God, when faced with endless domestic travails? Perhaps by skipping town. Or, like Karl Ove Knausgård in his autobiographical novel My Struggle, by grumbling through one’s chores: “It is a question of getting through the morning, the three hours of diapers that have to be changed, clothes that have to be put on, breakfast that has to be served, faces that have to be washed, hair that has to be combed and pinned up… [edited for length]… whereupon I have the next five hours for writing until the mandatory routines for the children resume.”

In The Pedestrians, however, Zucker seems to blame artistic impediments on herself, not her family. She is too “interruptible”; if her writing suffers, it is her own fault, having accepted responsibility for two kinds of creation. So how do mothers write epics? Perhaps by combining poetic instincts with the reality of changing diapers, of waiting in traffic and endless grocery lines. “No one told me,” says Zucker, in an interview for The Believer, “that being a woman, a wife, a mother, a human being, was going to involve so much drudgery.” By divulging this drudgery—the reality that the artist’s life is not always a passion-filled odyssey, but that it can be banal and doubt-ridden—Zucker moves towards a necessary truth: an honest rendering of a modern woman’s artistic experience.

The Pedestrians is divided in two parts. First prose, then poetry. Third person, then first. This construction lends the book a double-jointedness, hinging on fiction and confession. The first half, called “Fables,” opens with all the conventions of its title form: “One summer they decided to take their children to a faraway city….” But this dreamy, abstracted tone is soon intruded upon by UPS trucks, chilled eye masks, IUDs, and other signifiers of a specific modernity. Any anesthetizing effects of artifice are upset, as if the very narrative and its contents were at war. Likewise, while “Fables” offer occasional morals (i.e. “She realized that this city, so unlike her city, was exactly like her city and that everyone in her city was exactly like everyone in this city”), its lessons often end up elliptical, ambiguous, or absent entirely. What does it mean, for instance, that our protagonist—an unnamed woman—plays guitar, takes pleasure in the practice, then abruptly quits? That she reads sad memoirs and is … sad? Her everyday struggles fail to fit neatly into the moralizing shape of a traditional fable, the narrative itself embodying the tension between reality and art-making.

We continue to witness this friction in the second half of The Pedestrians, a revolving carousel of four poetic constructs: “real poems” that touch on aspects writing, titled accounts of daily life, bracketed ruminations, and transcriptions of Zucker’s dreams. This multi-faceted access to the author’s conscious and subconscious mind, renders her quiet existential crisis ever more palpable. A poem titled “Mindful,” for instance, breathlessly skitters from Zucker’s snowday concerns to pediatrician visits to texts with a friend, so that we feel as though we too are being tugged around the city, also wondering “isn’t there a way… to get more not time but joy?” The metropolitan vise of Zucker’s New York life leaps up off the page, clutching at the reader’s throat. This chokehold persists, even in poems like “Plant Dream,” which moves at a slower pace, but likewise presents a landscape of creative anxiety, albeit one accessed through dreamed metaphors of caregiving for houseplants.

In her interview for The Believer, Zucker notes the danger of being “labeled a mommy poet,” given the emphasis on motherhood in much her work. And certainly, the possibility haunts The Pedestrians. Artistic uncertainty lurks in her weird dreams, spins through her hamster-wheel mind. But is Zucker really worried? In the title poem, she expresses a desire to have a husband to read her A Game of Thrones, then adds, “Are you scandalized by my admission of love for genre fiction?” She challenges us as readers, asking: what should we expect from our artists? What should Zucker expect from herself? As a poet, a mother, she is indeed “interruptible,” but her experience of interruption, of self-doubt and drudgery, gives rise to writing charged with a seductive mundanity. What a gift to be offered a text that comforts, even as it strains—to see made beautiful the aspects of our lives we so often assume are failings.