You are here: Home / Book Review / The People in the Trees 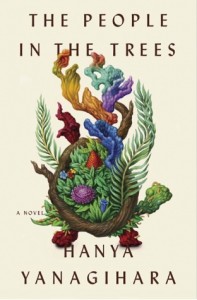 Per its publicity, Hanya Yanagihara’s debut novel The People in the Trees is a “tragic vision of what happens when cultures collide.” These words, for all their bias and particular framing of the book’s events, could have been written by its narrator, medical researcher A. Norton Perina. Given to making excuses for himself, Perina would happily chalk tragedy up to inevitability: when he stumbles into a job with an expedition documenting the culture of the remote pacific island Ivu’ivu, it produces the sorts of violence that such latter-day crypto-colonialism will. The discovery of a rare turtle whose meat seems to grant immortality ushers in hordes of pharmaceutical researchers, and a figurative “rape of the land” ensues. Yet the momentum of History, which might tend to exonerate individuals in larger questions, cannot explain Perina’s literal rape of scores of Ivu’ivuan children.

These events are disclosed at the novel’s outset: brief, sober AP stories serve as preface and spoilers to the memoir Perina has written in prison. He doesn’t see pedophilia as the most important aspect of his story, however, and it’s largely not what he’s interested in talking about. His evasiveness is surprisingly seductive: it is easy to emotionally invest in the tale of his formative years as a Nobel-winning scientist. He is an astute observer and analyst of almost everything except himself, and the frank, persuasive tone of his narration is enjoyable. The result is a remarkable display of Yanagihara’s mastery as a stylist in the Flaubertian tradition: she crafts a text whose sentences elicit empathy in the moment of reading even as their collective whole inspires horror upon reflection.

On Ivu’ivu, a boy’s initiation to manhood involves anal penetration by village elders, a ceremony our narrator observes and accepts: “I felt it was not my position to pass judgment on the ritual […] my time on Ivu’ivu taught me all ethics or morals are culturally relative.” Such words invite their own dismissal as moral relativism, and this is likely the reaction Perina seeks; yet his statement is objectionable not in its acceptance of sex with children per se, but in the assumptions that underlie its transparent attempt at proleptic mitigation. It grooms the reader, attempting to set her up to view later pedophilia as participating in Ivu’ivuan cultural expression. Perina’s victims, however, are adopted children, raised as Americans from a young age. The association of their biological heritage’s proudest tradition with the greatest taboo of their new society handicaps their chance at developing into Ivu’ivuan-Americans—it sets the component parts of their senses of self in opposition.

In this way, the suffering of both discrete rape victims and wider Ivu’ivuan society itself arises from the vicious manipulation of developing cultural identities. The pre-industrial island’s great national loss, one might imagine, would be its transformation into a second America; yet the malformed (demi-democratic, quasi-capitalist) society that western intervention actually produces is worse.

Perina is—superficially—a competent witness to the island’s tragedy: “Shall I tell you,” he asks, “how the men turned to alcohol, how the women neglected their handiwork, how they all grew fatter and coarser and lazier, how the missionaries plucked them from their houses as easily as one would pick an overripe apple from a branch?” Faced with a litany of similar questions, the (implicitly American) reader feels guilt; a sense of turning a blind eye to her culture’s sins. Yet this sense is the product of insinuation by the man who becomes the leading emissary of western science on the island, and is as such both sophistic and hypocritical. When cultures “collide” there is not no-fault insurance; in this case, America violates the traffic laws and Perina is arguably the driver. Although the relationship between individual agency and systemic wrongdoing is never simple it is important, and Perina’s weak sub-textual attempts to dismiss the issue fuel the novel’s own investigation of it.

Thus, The People in the Trees is not about inevitable disaster, but rather about individual sin on the stage of History. Its moral scope is rare in novels, and recalls Hannah Arendt’s work of nonfiction Eichmann in Jerusalem (a meditation on one man’s role in the massive bureaucratic and administrative evil of the Holocaust). Like Eichmann, Perina is incapable of recognizing the interconnection of his work and tragedies he personally laments. And like Arendt, Yanagihara takes moral reality to be mostly self-evident, preferring to focus on the psychology of the oblivious perpetrator.

Eichmann, of course, was famously “banal”: a mundane man, a good neighbor and a criminal against humanity. Perina (Nobel laureate-cum-colonialist) is similar in that he perpetrates gross trans-national violence whilst behaving as a model citizen of his own culture. Yet he also embodies domestic deviance, through pedophilia, and as such ends up being punished for his least historically significant offenses.

Perina’s concurrent criminal identities unsettle through their unexpectedness—for when has a Jeffery Dahmer caused so many deaths as a Hitler, and when has a Hitler performed such personally gruesome acts as a Dahmer? The juxtaposition is a counterintuitive and poignant means of underscoring the irrelevance of decency to large scale criminality—a kind man, a great man, and a perverse man can all cause immense suffering, regardless of their quotidian comportment. The reader comes to see that Perina’s colonial and sexual crimes are unrelated, even if Perina’s spin on this separation tends to always paint at least one of the sins as a triumph: “Against the [molestation] charges, my Nobel could have been a plastic trophy I won for bowling, so little did it matter.”

And so we meet the intimately villainous man whose villainy is unrelated to the majority of the harm he does. Where many a moralizing novelist would portray individual transgression as representative—the evil Nazi personifying Nazism’s evil—Yanagihara uses it to show sensationalism’s obfuscation of large-scale wrongdoing. Beyond being beautifully written and a thrilling read, The People in the Trees is the rare contemporary parable whose lesson its reader neither sees coming nor has heard before.

Andrew Branch teaches French at Columbia University. He is the author of the novel Dark Chatter.