You are here: Home / Book Review / The Persimmon Trail and Other Stories 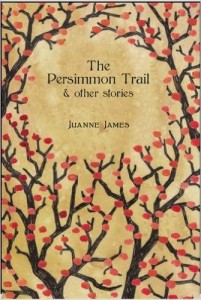 Images of a South Louisiana experience, in New Orleans and in the country, some surprising, some familiar, emerge throughout Juyanne James’ debut collection of short stories, The Persimmon Trail and Other Stories. These well-crafted images stay with the reader. The basketball star Chris Paul, known as CP3, peers out from a billboard at the narrator of the first story, “You Don’t Know Me, Child,” contrasting the experience of the mentally suffering woman who also stares at the narrator from inside the bus they ride together. The woman utters the story’s title line to the narrator, setting the tone for themes to come, hidden truths, discovery, and the inability at a certain point to truly know those around us, or ourselves. The characters throughout the collection, many African-American women, share a journey of sorts in the ways they negotiate their circumstantial realities with expectations, societal and personal. The results of their negotiations, and of their attempts at knowledge, are as varied as those they encounter in the seventeen stories: family both close and distant; friends, lovers, and acquaintances, some well-intentioned, some meaning harm; and strangers on a city bus.

In the second story, “The Wicker Basket,” a groom on his wedding day breezes over details that give readers pause, guns in the car, stacks of cash hidden in the house, infusing these circumstances with a sense of normalcy, in line with the traditional if somewhat extravagant wedding he has planned. His bride-to-be looks beyond circumstantial aspects of her life as well, including a father whom she has recently accepted back into her life, toward societal recognition in the form of a big wedding carried out in the public space of the French Quarter. Each character revels in the day’s journey, the slow, horse-drawn carriage ride, the gathering of friends and family in a beautiful setting. Neither acknowledges the danger. But why would they? Why should they? Why would any of us interrupt the flow of our daily lives, the comforting and mundane activities into which we pour our time, to acknowledge the inherent dangers, wide-ranging and numerous, of the world around us? Here, then, is another theme of the collection. The writer as observer disrupts. The reader as voyeur takes time to acknowledge. The characters need not pause to reflect, though many do. They need only to experience. We journey with them.

In the title story, the journey becomes more literal, as the young narrator’s mother loads the kids into her 1963 Oldsmobile and barrels down dusty country roads in search of a midwife to help a neighbor who is giving birth. Along the way at various stops, the narrator recalls instances with the people of this rural Louisiana world, each flashback revealing different aspects of the social mores of the community. A motherly neighbor once had offered food, which by custom could not be refused, even if the meat of the stew were rattlesnake, thrown into the pot because she “only had the one turtle.” Another neighbor, Cecile, represents a kind of woman different from the narrator’s mother, a “seemingly immoral” kind who chose long ago never to marry and to enjoy the whole of the less-bounded lifestyle the choice affords her. The narrator senses things are different at the home of Cecile, where “two large lions” guard the stone steps, beyond which “some kind of a treat” awaits. The narrator discovers some difficult truth, too difficult for her young mind to fully process, while riding in the backseat of that Olds, and she is changed when she returns to the persimmon-tree-lined path that marks the boundary between her world and the strange, scary, and wonderful one beyond.

The pace of the prose sets in around a quarter way through the collection and envelops the reader with the comfort of the familiar, a sense accented by the small black-and-white etchings that appear opposite the beginning of each story, flowers, buds, bols, fungi. The soft cover of the compact volume, by Chin Music Press, is also delicately decorated with a muted rendering of the branches and fruit of the titular tree. Time and again we are immersed in rich, lush Southern settings, rural and urban. One can sense the stillness of the late-summer, afternoon heat, and the oppressive, distorting sun.

In “Trio,” the form shifts as we are presented with three vignettes, seemingly disconnected, and are teased into exploring the connections on our own. The first is about a mother and young daughter, told in third-person, who strain against each other and within themselves to reconcile their difficult circumstances. Men here are wanted, hated, needed, and despised, but in adulthood the women seem to realize that they have understood each other more than they knew, and it was their bond that helped them endure male-inflicted miseries. An abusive male forces the action of the second piece, in which a young couple drives lost in Italy. He yells and curses, at his wife and at strangers, other drivers and an old man they’ve asked for directions. At a store, he buys a bottle of water for himself, which he finishes outside of the car, and a magazine for her, which he throws at her. As his nerves fray under stress of being lost in a foreign country, her feelings for him dissolve as well. A fantasy of Tina Turner giving Mae, the protagonist, a tour of her house in the south of France yields to a flashback of an attack in the woods by two schoolboys, a scene that haunts Mae as her journey with her controlling husband concludes at their destination. The third piece of “Trio” returns us to inside a city bus, as in the collection’s opener, where we meet a narrator occupied by imagining the lives of the passengers, their innocence, their sadness. Here, the abusive men are imagined, yet somehow no less real, as the trio’s theme is realized. But here the victim is imagined as abuser as well, transferring the effects of oppression by “harming others who she thinks are weak.” Faced with what she feels is an expression of this harm by one female passenger to others, the narrator decides to signal her own displeasure, and in the end the narrator resolves to speak up against those who “cause certain pain and disruption” in the lives of others who, like themselves, are weak and vulnerable.

“The Strength of a Woman” begins with an epigraph from Kafka suggesting that “the girls” sustain us above the “infernal abyss” toward which we gravitate, which is why we should love them, and they us. In the first section, the protagonist, Rachel, recalls the death, twenty-five years earlier, of her first love, as well as the intensity that swirled around their first kiss. Rachel has learned since that she needn’t to have been so wary, so afraid of “any possible danger lurking, even in a kiss.” Yet she is in a frozen marriage, and her husband tells her of a dream he has in which she slips away from him. He speaks to her back as she faces a window. The action flashes back in the next section, to the scene of the young man’s death, a freak accident in a church that also involves a crazed preacher whose “look says that life and death have converged,” and a woman from a neighboring community who nurses a baby openly in the front row. Rachel returns in the final section and visits an old woman called Marguerite, a healer of women “who had no use for a man.” Marguerite tells Rachel of her past with a man she loved who had caused her great pain, and of the way her life had changed after he had gone. Others saw her differently, and she gained healing powers. The connections between the characters are revealed, and one moves on lighter while the other’s “steps . . . were heavier than they had ever been” after the encounter. Kafka’s “the girls” struggle to hold onto each other, even as they want to and know they should, as the men they love, and who should love them, instead inflict pain.

In the collection’s final story, “The Meeting,” the first-person narrator dreams of a reunion at her grandmother’s country home, one that takes the shape of an extended metaphor. The dinner guests include the narrator’s family, along with luminaries like Alice Walker and Missy Elliott, as well as Jesus, and a mysterious woman from the kitchen who is invited to the table. The narrator hears lessons from Jesus about the need for love, and all of the guests offer their ideas of the spirit of togetherness in one way or another. The identity of the mysterious woman is revealed, and the house becomes filled with much joy, despite the pervasive sadness of remembering those who are gone. At the end of this story, as with the whole collection, we are left with memorable images of these characters, like people we know, like ourselves, who find joy and beauty in the world, its thrills and adventures, its raw experience, all while carrying sadness deep in their hearts.

Juyanne James was raised in rural Louisiana. She holds an MA in Literature from the University of New Orleans and an MFA in Writing  from Spalding University. Her short fiction has appeared in various journals, including The Louisville Review, Mythium: the Journal of Contemporary Literature and Cultural Voices, and Eleven Eleven, as well as the anthology Something in the Water: 20 Louisiana Stories (Portals Press, 2010). She has written for Symphony Space’s Selected Shorts Commissioning Project (“You Don’t Know Me, Child”), and she has been nominated for a Pushcart Prize on three occasions. Her story, “The Elderberries,” appeared in New Stories from the South: Best of 2009. She has also published the personal essay, “Table Scraps” (Bayou Magazine, 2013), which was a notable in Best American Essays 2014. She lives in New Orleans and teaches writing at the University of Holy Cross.