You are here: Home / Book Review / The Riddle Song 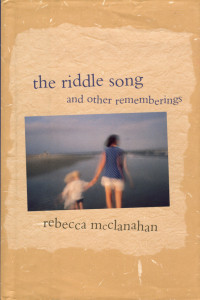 The Riddle Song, first published by the University of Georgia Press in 2002, was reissued in paperback in 2012. The title, as the preface explains, comes from “the folk tune my mother used to sing to us from the driver’s seat.” The book contains thirteen personal essays. All appeared in literary magazines, and all are models of the form. “The Riddle Song,” also the title of the third essay, begins with the line: “I gave my love a cherry that has no stone.” The haunting melody is a fitting soundtrack for the book.

Rebecca McClanahan has published five books of poetry and two guides to writing. Her most recent book is The Tribal Knot, published in 2013 by Indiana University Press. Subtitled “a memoir of family, community, and a century of change,” that book covers much the same territory as this one. But The Tribal Knot has more facts, more gritty detail, and a heroine—the author’s great-aunt Bessie Cosby (1880-1979). The Riddle Song, by contrast, is lyrical. It lights up a dozen or so people in turn—relatives including Aunt Bessie, close friends, and the author herself at earlier stages of life.

To quote again from the preface, “the essays loop back upon themselves. Images resurface, places are revisited, the same people keep showing up at the door of every tale.” This is a gentle alert to the repetitions to come, perhaps. It is also an honest attempt to deal with the uncertainties that infest biography and family history. “The same questions keep asking themselves,” she says plaintively. She spells them out. How much can we know “what manner of man is my father,” or the “womanly secrets” passed from mother to daughter, or how places and events “help shape the person I’ve become?”

“This book is not, strictly speaking, a memoir,” McClanahan claims. Has “memoir” become a dirty word? Is it tainted by false memoirs of the past decade? Greg Mortenson’s Three Cups of Tea (2006) is one. The four books of reminiscence by Rick Bragg, starting with All Over But the Shoutin’ (1991), read like pulp fiction. McClanahan offers a salutary example of how to do it right. She makes something artistic—and genuine—out of the clutter and pain of life.

The essay “With My Father in Space-Time” is a notable for the way it dips in and out of time. We see Paul McClanahan at several points in his life and in hers. A career pilot in the U.S. Marine Corps, he flew missions in Vietnam and Korea. Then as a flight instructor he was in Japan and elsewhere for months at a time. The three-year old girl “demanded to know who that man was in my mother’s bed” and she climbed in between them. A few years later, when she knows that some pilots die in action, “it was always a miracle when he came back.” The essay leaps to his heart attack, intercuts scenes of the adult woman taking a course in physics, and ends with a family dinner at a restaurant. The occasion is her father’s seventieth birthday. He proposes a toast. “I loved all my children, did you know that? They say I was distant. It was the only way I knew to keep from breaking.”

There is another portrait of her father, glimpses of her two husbands, the death of a pet dog, some extreme weather events, and an essay called “The Other Mother” about an older friend named Carolyn. McClanahan knew Carolyn for forty years, from preadolescence to the latter’s death. Carolyn and McClanahan’s mother were opposites in every way, from the way they expressed emotion (or not) to their attachment (or not) to material things. Carolyn encouraged the girl to play the piano and to write. The essay mentions Jung, and McClanahan is aware of the psychology at work here, but the essay is far from a clinical study. It is a warm elegy. And like many of these pages, it brings the dead back to life with uncanny power.

Juanita McClanahan does not have an essay devoted solely to her. The fact that she is still alive may be a reason—her story is not over. Yet she appears again and again. She is practical, stern and sensible. She loves her husband and their children, and she embraces the role of a military wife in the 1950s and 1960s. Her advice is sound on a husband’s infidelity, and she never strays. Is Juanita too good to be true?

McClanahan sweeps you along with a barrage of detail and lovely prose. She has the knack of summoning emotion through facts and presentation. If she is sentimental, it is the way a gifted playwright or novelist is sentimental. This can be disconcerting. Do you want to be moved in such an artful way?

Less personal is “Life and Death, Yes and No,” a visit to a cemetery in Mansfield, Ohio, which is “disorderly, chaotic, and flamboyantly alive.” This is a funny and perceptive look at some very American customs, including segregation by race, religion and country of origin; flowers and lawn ornaments; and Sunday afternoon visits. McClanahan is excellent company, whether at a hospital bedside, over a glass of wine, or walking between rows of graves.