You are here: Home / Book Review / The Rusted City 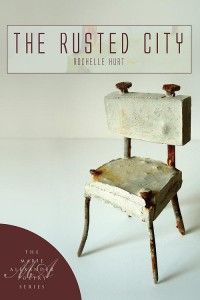 At a recent Belt Mag reading in Youngstown, Ohio, Rochelle Hurt read poems from The Rusted City to an audience of citizens living the book. In this age where much of the country’s poetry is being written in the academy—including the Youngstown branch of Northeast Ohio’s MFA program—what does it mean to read contemporary poetry about a working-class city in a defunct, rustbelt train station?

The Rusted City is an aesthetically-charged addition to contemporary poetry, but its success is also an ethical one: it teaches its readers how to humanely approach a place that, for generations, has been economically and socially exploited. Hurt’s work is urgent in its commitment to approach the city from the bottom-up. The book begins with “the smallest sister’s” impossible observation of birds in The Old Mill. This observation is given the same weight as the city’s iconic, blue-collar “tin-can men/who cracked their morning/eggs on their foreheads.” We are asked to notice that this city is usually noticed in past tense, for what it was, for who the people were, for what cracked them. But Hurt reveals another reality of rustbelt cities: their new generations have found creative ways to understand their histories and grow from the cracks.

Hurt’s style and themes engage with the city’s clashing energies. Allegorical surrealism defies the expectations set up in narrative accounts of domestic life. Each poem is then caked in red rust, a scenic detail that becomes a character in the tradition of Anne Carson’s Autobiography of Red. For the book’s sisters, the myth of Youngstown is already rusted over when they receive it—so rusted that rust becomes the point: not corrosion of a subject but the subject itself. Red becomes part of the collective consciousness: “the oldest sister reads what the red mites write on the sidewalk,” “the smallest sister decides to make herself red often,” and “red dust has already begun to collect in its center like an idea.” To call the characters’ obsession with decay “problematic” is an understatement: to deem Youngstown’s emotional climate “a little fucked up” is cliché. Hurt nails this with accuracy. This is a city whose citizens (myself included) cheered when Bruce Springsteen sang about how our industrial ancestors would trade heaven for the “fiery furnaces of hell”—a city where urban sprawl, deindustrialization, and unemployment still result in injustice. Hurt’s rust-coated surrealism pairs Orwellian dystopia with fairytale grandeur, a combination that provides an epic sense of the city’s downturn while paying homage to the oral tradition that preserves many working-class memories and perspectives.

In his review of Hurt’s book, Akron native and author David Giffels notes that The Rusted City “is neither geographically nor socially specific,” an effective choice that turns Hurt’s Youngstown into an eerie, rustbelt Everyplace.  This choice is especially compelling for Youngstown-area readers familiar with the places Hurt’s characters visit—“the roller coaster […] a writhing lattice of ruptured tracks, gangly as a giant insect,” “The Old Mill,” and “The Ballroom.”  Many of these places have long since disappeared, but when Hurt’s roller coaster—once part of Youngstown’s long-gone Idora Park—twists off the page in all of its terrible glory, Youngstown’s collective memory arises from language. This is complicated work that achieves the hallmark of quality examinations of place: it rewards both the local and the general reader, remaining authentic without veering into nostalgia.

Structurally, the book reflects Youngstown itself—two sections of spindly lyrics precariously connect three sections of prose poems. The prose narrates a family’s domestic life while the two lyric sections depict the oldest sister’s retelling of the city’s history to the younger sister. The lyric sections elevate the book to a meditation on the geography, history, and language of the Rustbelt. “In the Century of Silences” the city is too economically depressed to keep all of its words—“after layoffs, only prepositions/and articles remained” until finally the industrial plants themselves close. By then, it is too late: “no/exclamations were heard”—the citizens can only mime their despair. “In the Century of Research” mocks the youngest generation’s attempt to excavate their roots from Youngtown’s silences: “The library of records opened to the public, and a rush/of great-grandchildren writing memoirs stampeded through/ the labyrinth of corridors.” What they find (“ancestral deadbeats, slobberers, and over-perspiring/sneaks”) sends “a flood of dust winding through the library/and into the streets, tearing down doors all over the city.” While the exaggerations often add a self-deprecating jab, they are often too true to be funny—in “The Century of Mandatory Crying,” the city tries to fix its ever-polluted water with “a man-made flood” of tears—“one/half-hour daily for the average citizen.” The mothers are expected to weep the most. As I write this, Youngstown’s park lakes are so polluted they are closed for the first time in history. Mandatory tears, indeed.

Published by White Pine Press and part of the Marie Alexander Poetry Series dedicated to American prose poetry, The Rusted City adds a female perspective to a conversation that includes writers such as Detroit’s Jamaal May and Philip Levine, Pittsburgh’s Jack Gilbert, Youngstown’s Kenneth Patchen, and other historic and contemporary poets working to reflect America’s complex industrial and post-industrial experience. Of all the ways I am daily asked to approach poetry—as a writer, teacher, editor, etc.—I’m rarely asked to approach it as the descendant of Youngstown-area laborers, much less as a woman. This book shocked me into my own perspective, a perspective the academy rarely encourages people to bring to the classroom. This is changing, and Hurt’s work triumphs this progress. The Rusted City secures post-industrial America as a serious literary subject, and perhaps as importantly, demands that the Rustbelt remain vulnerable to the fierce energy of its own art.