You are here: Home / Book Review / The Seventh Day 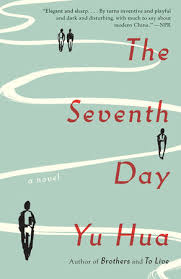 Yu Hua’s latest novel The Seventh Day opens with an almost apocalyptic first line: “The fog was thick when I left my bedside and ventured out alone into the barren and murky city.” The imagery conjures up an all too familiar scene in contemporary China: masses enveloped in smog, some covering their mouths with white dust masks. Yu Hua writes with complexity and insight into life in contemporary China. Mirroring our consumer-driven economy here in the US, China has become the second-largest economy in the world, and this rapid industrialization only highlights the latest challenges facing this nation. The setting of the book consists of both the physical world of the living, and the ethereal world of the dead. The change that occurs when one passes over into the latter is described as a natural cycle, just as “tree leaves falling one by one in the autumn wind.” After death, characters are transformed into spectral remains of their previous selves—free from superfluous mortal concerns.

Born on a moving train and dropped onto the train tracks, the narrator, Yang Fei, is raised in abject poverty by a young switchman. After an abrupt death at the age of forty-one, he is left to roam the spiritual world searching for his recently deceased father—both of whom have gone without burial plots, a ritual which is prohibitively expensive.

Omnipresent is the impact of material gain in industrialized China, made explicit throughout the book. For instance, in the waiting room where the dead take a ticket and await their burial, the rich are ushered into a luxurious VIP section full of armchairs. All the while, the poor sit in plastic chairs pondering whether their ashes “would be tipped out of the oven and greeted with a broom and dustpan, then dumped in a garbage can.”

In this ethereal world Yang Fei wanders for seven days in search of his father. Flashbacks provide converging story lines that offer a glimpse into how rabid consumerism has led some to commit suicide over an imitation iPhone and how the government has been spurred to demolish residential buildings, with residents still inside, all in the name of progress. Peppered throughout the book are transvestite prostitutes, underground mole people, and black market organ transplant surgeons, to name a few of the imaginative characters who inhabit these contrasting worlds.

The events which connect Yang Fei to this cast of seemingly unconnected characters develop seamlessly under the surface. As these characters and stories begin to interconnect, a scathing indictment of modern-day China emerges. The world of the living is speckled with indiscriminate and callous deaths, including the narrator’s own. Fatalities at bus stops, department stores, and restaurants are masked and covered-up. Yu Hua contrasts this with the peaceful world of the dead, a place free from the confines of social class structure and money.

Ultimately, Yang Fei’s exhaustive quest to find his father in the spiritual world is matched by the equally ambitious quest for material gain in the physical world.  Yu Hua’s The Seventh Day has achieved a poignant look at contemporary China. By visiting the world of the dead the reader is better able to understand the follies that plague the world of the living . Simply put, “progress” in contemporary China seems to define itself by an absence of humanity.

A native of Salt Lake City, Scott Lang is currently a Master’s of English student at Weber State University. His love of writing focuses largely on contemporary social concerns. He will be moderating sessions of the National Undergraduate Literature Conference, held at Weber State this April.