You are here: Home / Book Review / The Testing of Luther Albright 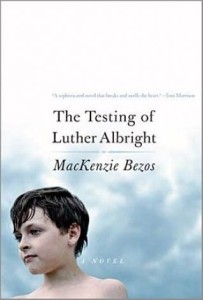 Some readers maintain that plots conform to several basic skeletons, with minor variations in between. Regardless of whether this is true, of the models currently on offer—the quest, the love story, rags to riches, and so forth—there is another way to phrase the question, between the basic devices of ‘stranger comes to town’ and ‘hero leaves home.’ In her remarkable debut novel, The Testing of Luther Albright, Mackenzie Bezos (wife of Amazon founder Jeff Bezos) weaves these two masterfully together, creating an atmosphere of suspense, tension, and mystery throughout.

Narrated in retrospect by Albright, a dam engineer who lives with his family in northern California, the novel chronicles his slowly-eroding relationships with his wife Liz and teenage son Elliot. The stranger that comes to town (on the first page, no less) is a medium-sized earthquake which, with its ensuing aftershocks, threatens the structural integrity of an important regional dam that Albright had designed long ago. As a result, the subsequent investigation casts into jeopardy the formerly unshakeable confidence that Albright’s coworkers and family members had placed in him.

The “hero” that leaves home over the course of the following year is less a figure or event, however, than an ideal: though Luther has always prided himself on the intimacy he shares with his family, it becomes increasingly apparent that this intimacy is sourced in his desire for it rather than any actual state of affairs. In this understanding is Bezos’ novel most alive, with Luther observing in exquisite detail and seamless prose the minute deceptions and assumptions that comprise everyday domestic life, and the way they reveal themselves as one-way streets only after one has already gone down them. Furthermore, in these peregrinations of desire Luther attempts, and ultimately fails, to escape from the shadow of his own father, whose idea of love had consisted of pushing his family’s trust and affection to their limit—to which Luther’s mother could only remark, “Some people need to see your love more than you need to see theirs.”

If there is a moral to be gleaned from Luther’s flashbacks (of which there are many), it is less that the child is father of the man than the child is forever a child: unable either to ease his parents’ rigid choreography, Luther remains an emotional hedgehog later in life, rolling into a tight ball of evasion and ambiguity each time his wife or son comes sniffing around his heart. For all he is able to repair physical objects with his hands, Luther is wholly incapable of mending the broken intangibles that are the real wounds at the heart of this story—a contrast made almost unbearable by its end. (A few loose strings are left untied, most concerning the investigation into Luther’s dam—but given the other developments at the end, these concerns seem minor.)

Family aside, one of the most compelling relationships in the book is between Luther and his workplace rival, Robert Belsky, a brutish, insecure man whom Liz thinks of as “morbidly competitive.” As Luther’s star gradually ascends within the Department of Water Resources, Belsky handles his jealousy with less and less control, and by the time Luther has been promoted over him he can retaliate only by holding a neighborhood barbecue in which he renders the affection of his family a pageant for all to see—that is, for Luther alone to see. That in this passage Luther virtually disappears from his own narration—he is either in shock or in awe at such a display, it’s hard to say—is a striking testament to Bezos’ understanding of just how close to the bone Belsky is cutting.

That said, when running at full steam, Luther’s narration does gives rise to occasional truisms, as if his thought had gone on a few sentences longer than it should have. This book is plenty wise already, but runs the risk of wanting to be too wise. Such is the case with a closing observation like “I can say from hard witness that airing one’s baser feelings is a very slippery slope”—the paragraph should have ended on the previous sentence, which reads “…unlike my father, I’m a man who chooses not to burden those he loves”—but it is even more true when, say, Luther feels the need to describe the behavior of a rake.

All told, though, much like Marilynne Robinson’s Gilead—another novel turning on the complex, mysterious relationships that fathers have with their loved ones—The Testing of Luther Albright is a piercing journey through the mind of a hero desperately afraid of being found a stranger. There is one image in particular of which Bezos seems fond; this reviewer counted her describing cold bottles of drinks as “sweating” at least three times in the book. As annoying as this recycling of images is, it remains nevertheless emblematic—of the marvelously crafted tension her novel generates, counterbalanced by the deep, thirst-slaking power of what is contained inside.