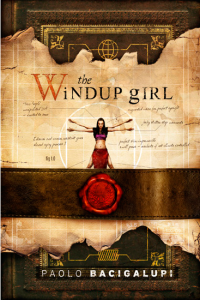 Dystopian fiction often assumes that in the future sexism and racism will be figured out. Just look at The Hunger Games. Katniss is never questioned for being a badass woman with a powerful bow. The riots that are so racially tense in the film–echoing disturbing images of plantation slaves–are not explicitly about race in the books. I find it rather naïve to believe that humanity will progress so far in terms of gender and racial equality only to succumb to a big government that tamps everyone’s rights. History shows that this is not how dictatorships work. Equally frustrating is how rarely dystopian fiction, and sci-fi in general, goes beyond white, Western experience. Even if the United States remains a superpower and American corporations continue to dominate much of the market, the rest of the world will continue to exist. Fiction needn’t ignore that.

Imagine my joy when I discovered The Windup Girl by Paolo Bacigalupi. Masquerading as a sci-fi thriller, Bacigalupi’s fantastic debut is actually a big issues novel. It is an intelligent book, political without being polemical. Beautifully written, it neatly folds complex ideas about gender, race and ethnicity into the plot without giving solutions, acknowledging that in a broken future there’s no reason to assume that our understanding of one another will be any less broken.

The novel takes place in Thailand a couple centuries from now. Genetically modified fruits and vegetables are the only kind available, the word “natural” has lost all meaning, calorie companies control the global food market, gas-fueled vehicles belong only to the mega-wealthy or the military, and electricity is provided by spring-based power and the transfer of kinetic energy. Thailand is one of the last bastions of independence from the American calorie companies, corporations whose aggression and power echo today’s tobacco and oil industries.

The issues of climate change, ecology, and the future of humanity’s food and energy are central to the novel. Bacigalupi throws the reader into a world where cheshires, chameleon-like genetically engineered cats, roam the streets, feed on the dead, and breed like bunnies, and megodonts, elephant-like creatures, fuel factory energy. U-Tex rice, engineered in Texas and shipped around the world, is a dietary staple, and two Thai governmental bodies, Trade and Environment, are at war. The greedy Trade Ministry is eager to open the city to foreign markets while the cautious Environment Ministry (equally greedy but working on the smaller local scale of endless bribes) enforces borders in order to prevent the spread of mutated epidemics that ravage food. Bacigalupi reminds us that the food so many of us take for granted is human fuel, literal energy to be consumed and used. Food is as intimate to us as our bodies, and Bacigalupi paints a future in which it is not only scarce, but downright dangerous.

Besides the powerful ecological criticism that Bacigalupi brings to the fore, he gets at gender, race, and the very meaning of being human. Of his main characters, only one, arguably the villain of the piece, is white and Western. The rest are Thai (Jaidee Rojjanasukchai, Kanya), Japanese (Emiko) or Chinese (Hock Seng). This is refreshing in and of itself, but what is better is that these aren’t empty symbols of diversity, but rather complex characters with shifting agendas, desires, and vulnerabilities. If there is one thing that Bacigalupi does best – and he does a lot of things very, very well – it is creating truly three-dimensional characters whom I found myself rooting for, identifying with, and sometimes despising.

Particularly important is Emiko, the windup girl of the title. Invented by Japanese scientists, New People, or windups, are genetically engineered creatures grown in test tubes and trained from birth to be obedient to their owners. Some are easy to identify as biological machines: the “ten-hand” workers who tend the fields of Japan, for example. Some are dangerous, like the military grade windups fighting in Vietnam or the windup attack hounds. And some are merely beautiful, useful heechy-keechy, as they’re derogatorily called by the Thai. Emiko belongs to this last category. With genes encoded with the need to serve and obey, she was once owned by a Japanese businessman who brought her to his bed and told her not to be ashamed of who she was.

Then he abandoned her in Thailand. She might have been better off being mulched. Her kind are not only looked down on, they are illegal in Thailand, and while she looks human, her movements are “stutter-stop flash-bulb strange” and visibly mark her as a windup. If she moves very slowly, concentrating all the while, she can achieve smooth gestures, but otherwise she is a tick-tock creature designed to never be mistaken for a “real” human. Predictably, perhaps, the only place a New Person like Emiko can survive is in a brothel, where men pay good money to watch her beaten and raped by another prostitute, an act she performs night after night. They pay even more, if they dare, for the gauche and kinky experience of sleeping with her.

When Emiko is first introduced, it is clear her body is not hers to control. She is genetically programed to orgasm and so she climaxes onstage for her audience, even as tears leak from her eyes and her contorted limbs ache. Her perfect skin is smooth because it lacks pores, and so, because she cannot sweat, Emiko overheats, a further parallel between her and simple machines. But, like humans, Emiko feels, thinks, eats, and shits. Though Thais believe Emiko doesn’t have a soul, Bacigalupi voices her thoughts, her psyche, her instincts, and her need to rebel. Except for her physicality, it is impossible to distinguish between her and a human.

Does Emiko represent another race? Another species? A new kind of human or a very intelligent machine? Racial parallels are inevitable; prejudice requires viewing the Other as less than human. Emiko embodies this complicated idea by being human-created rather than human-born, and she does so in a world fraught with tension between Thais, Chinese refugees and Americans. In other words, Bacigalupi doesn’t spoon-feed some false racial dichotomy, nor does he shy away from confronting his readers with the twisted logic that fuels racist behavior.

Fear is the emotion that Emiko ultimately raises in others, especially after she sets herself free by discovering that despite her training, she can disobey and even harm those who have hurt her. Her programming ensures, however, that she hates herself for it. Emotionally fraught, excellently plotted, fiercely intelligent, and enjoyable to boot, I highly recommend The Windup Girl.

Ilana Masad is an Israeli-American freelance writer and editor living in NYC. She is a columnist for McSweeney’s and writes for Bustle.com books vertical. She is also the founder and host of The Other Stories podcast. Find her @ilanaslightly and ilanamasad.com.