You are here: Home / Interview / Five Questions for Timothy Morton 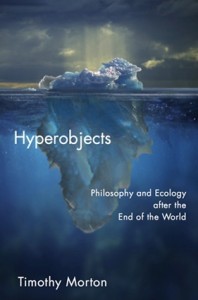 Timothy Morton, an author and intellectual whose work largely examines ecology through the lens of posthuman philosophy, will give a talk at 5:30 p.m. on Tuesday, Feb. 4, in the Whitney Presentation Room in Thomas Hall on the campus of Loyola University New Orleans (6363 St. Charles Ave.).

Morton and other thinkers such as Ian Bogost, who spoke at Loyola last year, work to remove human beings from the center of philosophical thought in order to conceptualize relationships between all objects—even between nonhuman objects—as ontologically similar and essentially equal. In doing so, Morton radically reconceptualizes man’s relationship with “nature,” laying out his theories in mind-bending books such as the recently released Hyperobjects: Philosophy and Ecology after the End of the World as well as The Ecological Thought (2010) and Ecology without Nature: Rethinking Environmental Aesthetics (2007). He has also written extensively about the literature of Percy and Mary Shelley, Romanticism, and diet studies.

Morton, an English professor at Rice University, fielded a few brief questions from Room 220 via email in advance of his visit.

Room 220: The title of your talk at Loyola, “Ecological Awareness 101,” suggests that it will be a basic ordeal, an introduction—the kind of lecture a freshman might see on the syllabus of his biology class and plan to sleep through. I mean, ecology is all around us, so obviously we’re aware of it…or are we?

Timothy Morton: Well, the basic things are actually the hardest to think. Once you’ve done 101, you are 80 percent of the way towards understanding ecological awareness.

Also: I always save the deepest stuff for the beginning undergrads….

Rm220: You propose the idea of “hyperobjects,” things with tremendous mass or lifespans that defy humans’ ability to conceptually grasp them. The BP oil spill is an example you use often, as is global warming—both of these are very pertinent to people in New Orleans, which might one day be an archipelago surrounded by a petrol-tainted sea. Another grave local phenomenon that seems similar in scope is coastal erosion—the Mississippi Delta region is the fastest-disappearing land on the planet. Might one conceptualize coastal erosion as a hyperobject?

TM: Absolutely. You can’t quite see it, though you can easily think it and compute it. It demonstrates precisely the gap between phenomenon and thing that we have realized, with increasing creepiness, in modernity.

I already called the Everglades a hyperobject. So yes!

Rm220: You advocate for the abolition of the concept of “nature,” particularly as a fetish object for environmentalists who hold nature’s supposed purity as an ideal. I thought of this recently when I was on an expedition that included visiting a freshwater diversion on the Mississippi River, which siphons water and sediment into nearby wetlands to rebuild them, but also siphons tons of trash and debris—which, of course, will also be part of “rebuilding” the wetlands. What can we gain by accepting that objects created by humans are now an inextricable part of the “natural” world?

TM: This is actually an inkling of a truly anti-anthropocentric thought. Think of one way we are part of that world: we are a species. Every time I start my car I don’t mean to harm Earth. But when you scale up this action to include billions of keys turning in billions of ignitions, you realize this is precisely what is happening.

Species is a hyperobject in this respect. It’s not given directly to my perception; unless I’m a racist or a speciesist. But those are really ways of containing the gap between phenomenon and thing, being in denial about it.

Precisely when you realize that there is no escape velocity, cognitively, from Earth (I’d rather not call it “world”—technical reasons!), you figure out that you are part of it, but not in that nice comforting way we have liked to sooth ourselves with.

Rm220: You use your public blog, Ecology without Nature, in a variety of ways, but always displaying your active thought processes and connections between all manner of art, culture, politics … to name a few things. How has your ‘digital profile’ (for lack of a better phrase) enabled or inspired you to try new modes of thinking and writing?

TM: It’s a fantastic doodle pad for thinking and it’s also a great way to practice reaching out to non-scholars, which scholars suck at. Twitter can be a terrific research tool and a way to share my stuff. It can also be a place where you get flipped off by situational dynamics that border on the psychopathic. Pseudonyms, 140 characters: it’s like a Californian interstate. It’s the dark side of California in a box. Remember The Birds? There’s a reason why it’s called Twitter!

Rm220: Can you tell us a little about your next book project, or what you are currently working on?

TM: Yes. My Buddhism project is still in effect. I’m writing Dark Ecology, which is about ecological awareness. And I’m writing Weird Essentialism, because I guess I’m a weird essentialist. There is a spoon, but it’s a weird not-spoon at the same time.