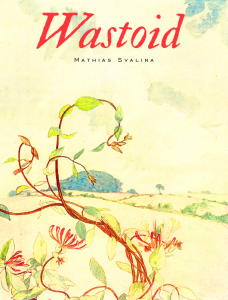 In his collection Wastoid, Matthias Svalina revitalizes the sonnet. Although Svalina is not the first poet to take the sonnet beyond the traditional fourteen lines, he radically upsets the convention by composing each poem in prose. Playing with the form in such a way allows him to question whether a sonnet may be an expression beyond formal restrictions, a meditation that explores the expressive power of the sonnet beyond meter or a set number of lines.

Svalina complicates this tension between form and expressivity through his own strictures. While the length of each poem differs, they are all in prose. In his refusal to distinguish one poem from another, Svalina entitled each one “Wastoid,” suggesting that each poem, no matter how eclectic the subject of a given poem, is part of a larger work. Further, he appears to have set a lofty goal of exactly 154 sonnets, a not-so-secret homage to Shakespeare, who wrote the same number and whose sonnets were all pieces of something beyond the individual poem, though the connections between Svalina’s poems can be obscured in his discussion of iPods, money, and bombs.

This invocation of Shakespeare raises certain associations, such as the destructive power of love, a topic so trite that writing something original becomes an arduous, if not impossible, task. To rejuvenate this topic, Svalina literalizes the destruction in a sonnet about men in love with bombs. After another man detonates the bomb, the man in love:

was happy the other man was gone but unhappy that the bomb was no longer a bomb. He collected pieces of shrapnel that may have been from the bomb […] He sat on his blue futon & watched the footage on repeat, stroking the sharp shrapnel until his fingers felt like sponges.

This narrative of a love that cannot be requited shows that the man can only achieve his object of obsession once the rival has died; however, his beloved is no longer what he really wants. After a bomb explodes, it is no longer a bomb—an object pregnant with perilous possibility. The man can hold his beloved but only live through the incendiary power of its love through the footage of the bomb’s detonation.

Svalina plays with various themes found in Shakespeare’s sonnets, including having a speaker address a male beloved. Shakespeare’s earlier sonnets address a youth, whom he exhorts to make copies of himself because of the youth’s beauty. Svalina, who considers “a young man who looks in a mirror & it is time to beget a child,” eventually shifts his focus to the eroticism of the mirror, “which is as hungry as the young man’s mouth.” The replication of beauty constitutes a devouring of beauty as time passes, and both mirror and offspring reflect what is and was the formerly beautiful man. This homoeroticism is pervasive in Wastoid. Every lover is male; every ancillary character is male. Thus, the evacuation of women suggests a reproduction of male beauty through more male beauty, despite the biological necessity of women for that reproduction.

While Svalina takes on many of Shakespeare’s motifs regarding love triangles and poetry’s claim over time, the motif Svalina most incisively explores is the connection between love and fire. In one of the poems, he explains, “there is fire” that burns him when he thinks of his lover, which may not be the most shocking image; however, this fire may suggest a level of hellish destruction that many lovers may not ever dream of. In the preceding lines, he experiences a void when he takes a step, “a chasm awaiting [his] foot, & [he’d] fall into the eternal ball-pit of the Chuck E Cheese & all the employees on fire, never dying.”

The relentless horror of this scene revises the beauty of immortal life found in Shakespeare’s assurances that even as the bodily crumbles, poetry can maintain the beloved, perverting immortality into a horrific state. For this speaker, there is nothing but an environment that indicates suffering into perpetuity in an animated, immortal fire though the fire of the lover does not appear constrained to positive or negative language.

Actually, fire does not necessarily signify torment, nor does Svalina suggest that destruction must be painful. In one poem, he asserts that both he and his lover are fire and that “When we get too close it is impossible to tell us apart.” This obliteration of self creates a oneness with the beloved, a closeness that radically renounces the world in favor of an all-consuming love where there seems to be heat but no pain.

While some of Svalina’s imagery may be difficult to grasp and the book’s length is longer than most poetry collections, his experimental endeavor to encompass the spirit or expressive power of the sonnet succeeds. He evinces that the sonnet is a form not bound by time but rather by the beauty and even occasional terror found in love.

Justin Holliday’s reviews are featured in The Adroit Journal. His poetry has appeared or is forthcoming from Leaves of Ink, HelloHorror, Sanitarium, Up the Staircase, and elsewhere.