You are here: Home / Essay / “When we do it, it will feel like a great day for our family”: The Brangelina Wedding and Aniston’s Baby Bump 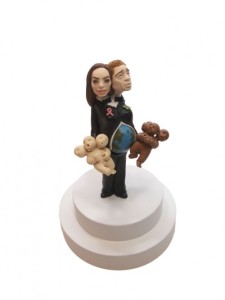 One of artist Mike Leavitt’s wedding cake toppers from about five years ago depicts “Brangelina,” or Angelina Jolie, Brad Pitt, and their children as fused and as a notable marriage—even though they were not legally wed until just recently, in August 2014. This quirky art piece references popular culture conventions and provides opportunities to reflect on the term “Brangelina” and cultural conceptions of the Jolie-Pitt family, including recent commentary about Jolie and Pitt’s wedding.

The wedding cake topper encapsulates ideas about their physical and legal union by perching Jolie and Pitt’s heads on a singular tuxedo-clad body. The cultural tendency to describe the Jolie-Pitt family as “Brangelina” underscores their meshing. The term “Brangelina” is a portmanteau: a cultural and linguistic process through which new words are introduced into languages. People’s proper names are blended to describe intermeshed partnerships, especially when the individuals are well known and involved in heterosexual relationships. Brangelina is probably the most common celebrity portmanteau—and Jolie, Pitt, and their children are one of the most highly reported on families. Cultural interests in Jolie and Pitt are fueled by their positions as icons of beauty, wealth, and talent, and thus as people who have enviable bodies and lifestyles. At the same time, the behaviors of the Jolie-Pitt family are followed because of their disruptions of certain categories and values.

In the wedding cake topper, Jolie and Pitt are literally positioned on a pedestal. However, their consolidated subjecthood is not aligned with contemporary investments in the singular agentive individual. Many people believe that their relationship is too interlocked and therefore unhealthy. This is conveyed by one Internet poster who argues that the “children and hubby are an extension” of Jolie and “she cannot function unless they’re there.” This poster identifies these connections as an unhealthy “psychological issue.” So Jolie and Pitt are at once put on a pedestal, and yet precariously positioned in relation to traditional notions of identity and emotional well-being.

Furthermore in the wedding cake topper, Jolie and Pitt are not aligned with normative gender and sexuality positions: breasts and a pregnant belly disturb the masculine tuxedo. They convey what is often identified as the excessive reproductive and adoptive practices of the Jolie-Pitt family, which consists of three biological and three adopted children. Such concerns about excessive reproduction are reinforced in wedding coverage that describes their “30-plus-room” manor as “almost big enough for the Brangelina brood.” This identification of Brangelina and the children as a “brood” is racist and misogynistic. It figures the children as a large and indistinguishable mass, and suggests that Jolie’s adoptive and reproductive capacities are more animal-like than properly human. While many fans offered congratulations about the Jolie-Pitt marriage, some anxiously referenced Jolie-Pitt’s multiracial family. As part of a forum post about Jolie and Pitt’s wedding, audrey asked, “if they gave out orphans as party favors?” Comedian Jeff Dunham imagines shopping for a “wedding gift” and inquires on Twitter if “they already have a Mexican kid?” These individuals use humor to interrogate the ways Jolie and Pitt have obtained their adoptive children while continuing the unfortunate identification of children of color as commodities that can be acquired and exchanged.

Jolie’s popular transformation into a bountiful, but sometimes too acquisitive, mother is notable, for she has also been coded as immoral and deviant. Individuals reference her past identification as bisexual, donning of a vial of her lover’s blood as a kind of necklace, and purported sexual involvement with Pitt before his divorce from Jennifer Aniston. However, the wedding has mitigated some of these non-normative threats by allowing people to read this group as a newly made traditional family. Reporters now downplay Jolie and Pitt’s many years of cohabitation, and the purportedly less ethical features of their coupling, by identifying their pre-wedding relationship as “dating.” The marriage allows reporters and posters to refer to “Mr. and Mrs. Pitt.” This phrase envisions a properly constituted union that replaces their initial coupling, whether only fictional or also having a physical component, in the film Mr. and Mrs. Smith (Doug Liman, 2005) when Pitt was still involved with Aniston.

Angie Molinario Parker renders an increasingly acceptable Jolie-Pitt relationship by arguing that they “Finally made it legit for the kids’ sake!” In a related manner, Lauren Cox writes, “every single day their kids ask them to get married. They ask them multiple times a day as well so they finally broke them down.” Thus, the relationship between Jolie and Pitt results in children who are imagined to need and want their parents to be in a more traditional arrangement. The children’s consistently verbalized call, which appears in much of the media reporting, suggests that legal unions are important to children and buttresses conservative claims that the children of heterosexual married couples are healthier and happier than other youngsters. Jolie is purported to have said, “When we do it, it will feel like a great day for our family.” Even Jolie’s dress and veil, which was sewn with replicas of her children’s drawings, are seen as an “expression of her kids’ creativity” and about them. Thus, Jolie and Pitt “do it for the children” and are figured taking up some conservative practices.

Still, the tendency for reporters to declare “Brangelina Got Married” suggests that Jolie, Pitt, and their children are in fact queerly coupled. Such statements could challenge the usual presumptions that a marriage unites a man and woman and is between two people. Meanwhile, the children’s chronicled investment in this structure points to more straight translations. This includes Jolie and Pitt’s changed position on getting married. They had promised to not legally wed until “everyone” in the United States, specifically same-sex couples, had the right to do so. This commitment was purportedly abandoned because they had to get married for the children. This construction and the underlying logic are notable because people sometimes still correlate the necessity for marriage with getting pregnant out of wedlock. In Jolie and Pitt’s case, their failure to acknowledge this call to get married when having children seems to result in the children bringing them back into conformity. Pitt argues, “It seems to mean more and more to our kids. We made this declaration” about not getting married until same-sex marriages were legal but “I don’t think we’ll be able to hold out. It means so much to my kids.”

Reporter Brian Moylan, in one of the most condemnatory accounts about the marriage, writes, “real fighters for civil rights don’t buckle under pressure when it gets hard.” Sadly, the Jolie-Pitt children end up figured as socially conservative individuals who need to reform personal and romantic arrangements. The chronicled events of the Jolie-Pitt marriage suggest that all children are by default or naturally invested in heteronormative relationships and will eventually be, and in a way already are, straight. This displaces the queer aspects of childhood, which in the case of the Jolie-Pitt family includes their fantastic lifestyle of wealth and travel, the different heritages of the children, and the popular worry over Jolie-Pitt’s child Shiloh being female and wearing boys’ clothing. It also threatens to efface the histories and futures of GLBTIQ children.

The wedding and some of the associated reporting work to norm Jolie, Pitt, and their children. Yet Jolie’s wedding narrative about “When we do it,” with its allusions to something that is yet to happen and cannot be named, references sex more than the marriage and children. Jolie and Pitt will always be framed by the allusions that they “did it” before he was divorced from Aniston. The film Mr. and Mrs. Smith prefaces their relationship as the marriage points back to the ways their meeting was bracketed by a filmic and possibly erotic coupling. Doing it, according to the Jolie quote, is about feeling rather than being. Their past provides another dimension of queer presents and futures because of the ways they are related to and thereby conceptually coupled with Aniston. While the Jolie-Pitt family is consolidated into Brangelina, there is also the figuration of “team Jolie” and “team Aniston.” These antagonistic fan alliances are inextricably intertwined because of Pitt’s couplings and uncouplings. Thus, reporting on the Jolie-Pitt wedding became associatively linked to commentary about Aniston. The wedding was even imagined to ruin Aniston’s similarly timed movie premier and romantic relationship. As Jolie and Pitt were further consolidated into a named family, Aniston was deemed to be exhibiting a baby bump and pregnant. Jolie and Pitt are made into a more expansive Brangelina. Through such interlocked narratives, Jolie and Pitt are all but pregnant with Aniston and the baby bump that reporters insist she is exhibiting.

Michele White is an Associate Professor of Internet and new media studies in the Department of Communication at Tulane University. Her monographs include Buy It Now: Lessons from eBay (Duke University Press, 2012) and Producing Women: The Internet, Traditional Femininity, Queerness, and Creativity (Routledge, forthcoming in 2015). Her article on the critical implications of the Jolie-Pitt family—before the wedding—appears as “Brangelina Blend,” in _Deconstructing Brad Pitt, ed. Christopher Schaberg & Robert Bennett (Bloomsbury, 2014).