You are here: Home / Book Review / Where the West Ends 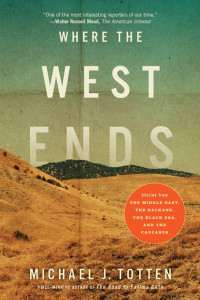 Where the West Ends is a collection of travel essays by the foreign correspondent and policy analyst Michael Totten, whose journeys here span thirteen countries. At times, the essays may seem slow with their periodic focus on the histories of the visited regions, but the strength of Totten’s writing lies in his ability to use vignettes and interviews.

At one point, Totten is in Georgia during the 2008 Russian military campaign that saw parts of Georgia annexed into Russia. Visiting the small remote village of Borjomi, Totten gives a perspective to the conflict that can only be achieved by going there and actually talking to the people living it. Fires had ravaged the surrounding areas of the town (presumably the result of the Russian air force) and its denizens were under the very real threat of being starved out of their homes should the Russian military continue their occupation of the country. One woman interviewed from this town tells how she believed the scorching of her homeland was to be the final chapter in Georgia’s history as a free state. Yet only moments later, she recounts that she and her neighbors had cooked meals for the very same Russian soldiers who they feared would rob them of their independence.

The specter of the Soviet Union can continually be felt throughout the book, and while some nations have since rebuilt and even prospered since the dissolution of the Warsaw Pact, Totten’s accounts are quick to point out that no two countries are the same, even if we may casually refer to them all as “The East.” Much of the book may have a somber air, but Totten’s adventures also contain some comedic gems. Where the West Ends provides an easy introduction to these tumultuous and dynamic countries for those unacquainted with them, and for anyone wanting to dive deeper into the realm of geopolitical thought, this would serve as an excellent appetizer before jumping into a more substantial main course.