You are here: Home / Book Review / Why Read Moby-Dick? 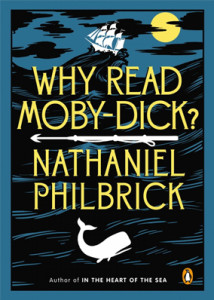 Why Read Moby-Dick? is a plea for the importance of Melville’s tome. Nathaniel Philbrick’s book is only 128 pages long and is broken into 28 chapters, a nod to the chapter structure in Moby-Dick itself. The book’s quick pace hopes to squirm its way into the hands of even the most skeptical readers who would normally avoid its thicker precursor.

Philbrick attests that Moby-Dick remains a fascinating work of literature thanks to its remarkable and far-reaching critiques of life in the 19th century, its unconventional methods of storytelling, and the lasting relevance to American culture contained in Captain Ahab’s crazed and symbolic pursuit. Philbrick believes the depiction of “demographic diversity” aboard Ahab’s ship still shows a fascinating and fairly accurate foresight by Herman Melville into the unabashed American ideals that feed their very own destruction. The workingmen that populate Ahab’s crew tear through the oceans together in needless pursuit of Moby-Dick, unaware that the promise of small fortune and slight purpose which unites them is merely a ruse. This idea of misguided forces chasing a mindless goal echoes throughout American history, and as Philbrick puts it, “instead of writing history, Melville is forging an American mythology.”

Why Read Moby-Dick? cuts to the chase with sections of storytelling by summarizing and skimming quotes from longer chapters. The book does discuss the original tale all the way through to the ending, but Philbrick is confident that the thin, outer layers of the story that already circulate popular media and hearsay give only tastes of what the real substance contains. His devotion to unraveling Moby-Dick is a testament to the genuine enthusiasm he has for the book’s ingenuity, as he turns the original work into a phantasmal legend. The voice of his narration commands graceful authority, giving glimpses of the bigger, more complex ideas that lurk beneath the book’s surface. Pockets of history and poetic prose, of which some have become Philbrick’s favorite parts, are scattered throughout the novel: “like speed bumps throughout the book as he purposely slows the pace of his mighty novel to a magisterial crawl.”

Melville’s interference with the book’s narrative often comes through the suddenly omnipotent voice of Ishmael, like in Chapter 85 (“The Fountain”) when he records the exact day and time on which he sits there writing about whale spouts: “fifteen and a quarter minutes past one o’clock P.M. of this sixteenth day of December, A.D. 1850.” A time stamp of the thirty-five-year-old Melville still shines through the page today, and this moment is the one Philbrick calls his very favorite, saying that, “Melville did something outrageous. He pulled back the fictive curtain and inserted a seemingly irrelevant glimpse of himself in the act of composition.”

There are entire chapters in Moby-Dick that are made up of Melville’s strange, loquacious prose with no dialogue at all, but Phibrick’s cipher serves to reduce the fatigue that comes with piecing these sections together and provides some well-researched trains of thought to help guide readers. One such segment of this peculiar prose comes in Chapter 32 (“Cetology”) that catalogs Ishmael’s incomplete and arbitrary system of whale classification. Philbrick argues that ostensibly arbitrary moments like these are reminders of the incomplete reasoning that bolsters the Captain’s bloodthirsty and frivolous quest to destroy a whale.

Strictly in terms of size, Why Read Moby-Dick? is just foreword when compared to the full novel, but it still manages to successfully transfer a layer of the original book’s seduction to intimidated readers. Even if Philbrick can’t convince every one of his readers to seek out Moby-Dick, it is safe to say that he rekindles an appreciation for the vibrations of the book. That is, the mere attempt to re-engage Melville’s inscrutable classic is worth the price of admission.