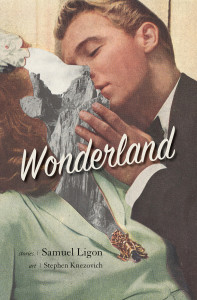 “Collage-like” is a term that finds an easy home in the short story collection review, but it’s more than well deserved in describing Samuel Ligon’s hauntingly lyrical, Wonderland. Each of the book’s thirteen surreal stories is accompanied by an equally dreamlike collage from artist Stephen Knezovich. The pairing of the written with the visual makes for a uniquely stark picture of fragmentation—of bodies and relationships both—using the context of a shadowy, dangerous American landscape to further upend the characters’ sense of displacement and unease.

Ligon is the author of the story collection, Drift and Swerve, which dips into the realm of gritty lumpen realism, and the novel, Safe in Heaven Dead, which contains a flair of noir. Wonderland is the child of these works in that it borrows stylistically from each while also charting an independent course into fabulist territory. Featured among the stories are a talking goat who coaches a young boy and girl through their first sexual adventure, a mother who breastfeeds adolescent twins on whiskey and butter, and a narrator who makes detailed blueprints for developing his intellectual property.

The eponymous introductory story is a first-person tale of a young runaway who joins the traveling carnival and falls hard for the bearded lady. It’s a well-chosen entry point into Wonderland, an opening shot that contains all the powerful minor chords which Ligon will strike again and again: heartache, confinement, otherness, disfigurement, loss of innocence. The story showcases Ligon’s prose, tight and fast-paced, sound in its ability to compress time while also drawing the eye to the tender and grotesque.

I took a dip from her beard, then cut and salted her, licked her salty wound, and kissed her. And kept kissing her. When I woke in the morning, she was warm against me. I’d never known I could fit someone like that. All my trouble was behind, it seemed. We couldn’t imagine the ways we’d hurt each other down the road, all our suffering a million miles from the mystery we were grabbing after now.

Blades, knicks, injury and blood are reoccurring images throughout the collection, making the pairing with Knezovich’s chosen medium all the more thematically appropriate. Knezovich’s collage featured alongside the introductory story is a mash-up of circus posters, advertisements and Technicolor photographs, old-timey images that could’ve been clipped from Eisenhower-era issues of Life magazine. Knezovich cuts, overlays, and reassembles slices of white, idyllic Americana in chilling ways that mimic the shattered lives of Ligon’s characters.

Wonderland is a slender volume; no story exceeds ten pages in length, and most clock in at half that, yet Ligon succeeds in offering full-bodied tale after full-bodied tale. (“Exxon, My Love,” is the outlier—entertaining political satire that belongs in an entirely different collection; its inclusion in Wonderland is perplexing.) The collection is able to accomplish so much in relatively so few pages thanks in part to Ligon’s ability to tiptoe the line between prose and poem, allowing for enormous compression while still maintaining a high-quality of language. The collection’s gem, “Down on the Ass Farm,” walks this line best. A nightmarish love story between a boy and girl who’ve spent their entire lives forced into bonded labor by a cult, the girl’s attempt at escape ends fatally for her and nearly as tragically for the boy, left alone to sort the memories and mistakes.

Remember kissing and shaking in the spring night, how we never got snake bit or donkey kicked? When they brought your blue body home, they left me alone for two days to roll in the mud and wail. But they didn’t shoot me in the head, like they shot Butch when Priscilla had her stroke. He honked and hee-hawed for two days straight, never once leaving her dead donkey body, until Lance dropped him with a shot from his Browning T-Bolt. The silence that followed!

Examined one way, Wonderland is a story collection with accompanying images. Presented another way: a series of thirteen collages with supplementary prose. The substantial inclusion of so much thematically-similar artwork in a collection risks drawing attention from the writing, but with Wonderland the gamble pays off. Knezovich’s collages, rather than overshadowing (or worse, propping up) Ligon’s prose, engage the writing in conversation. The written and visual speak the same language of the fragmented and the bizarre. The result is a truly unique artifact, a collage of darkly evocative storytelling that is not easily forgotten.

Nick Fuller Googins’ fiction has been featured on NPR’s All Things Considered, Narrative, ZYZZYVA, Oxford American, The Common and elsewhere. He volunteers for the organization We Are Not Numbers.