You are here: Home / Book Review / Working the Aisles: A Life in Consumption 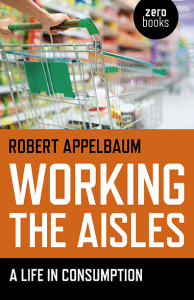 Some books make you want to write. Other books make you want to read—either things by the same author, or things on the same topic. Those are usually good books. Then there are books that act as distractions: they offer suspense, titillation, or information in such a way that you can tune out the daily subway commute, mentally escape that short flight from O’Hare to Peoria. Trash novels, best sellers, celebrity memoirs, etc.

Then there’s another kind of book, a perhaps rarer kind: this kind of book leaves you in a state that one can only call thinking. As you flip open the first page, as you read well into the middle of the book, and after you have closed the by-then grip-tattered back cover, you have to think, and think, and think some more. These books are rare precisely because they manage to sustain a strange and compelling feeling of in-betweenness, an uncanny aura of uncertainty—uncanny in part because it bleeds from the mind of the page and into the mind of the reader. Robert Appelbaum’s new book Working the Aisles: A Life in Consumption is one of these rare books.

Ostensibly a nonfiction account of growing up and living in various corners of consumer culture in the twentieth century and beyond, Appelbaum’s book works its way into all sorts of unexpected zones of thought and life. As the book’s story unfolds, the author questions the very possibilities and limits of memoir and academic study in modern society. To say this book is hard to pin down genre-wise doesn’t quite get it right, because the book sticks together so well that one has the distinct sensation of experiencing an altogether new form. Still, Appelbaum is aware and adept when it comes to discussing the literary traditions that have informed, inspired, and even in some ways determined the book at hand.

Trained as a scholar of early modern literature, Appelbaum leads readers through insights penned by Shakespeare and other contemporaneous writers and thinkers, drawing parallels and marking differences between traditional notions of property, happiness, pleasure, and desire, and their hyper-real analogs in the postmodern era. Indeed, this is a book that puts theory into practice: it is about working through such concepts as Louis Althusser’s “interpellation,” or being called into being as an ideological subject (“Hey YOU!”)—and not just as an academic exercise but as a lived, ordinary experience. In the wake of denser critiques of late capitalism, this is what we need: real, textured descriptions not just of how modern society works, but what it is actually feels like to live in—and even what it feels like to be nearly smothered by it.

Appelbaum’s book is not just about supermarkets—the guiding metonymic metonymy throughout—but is also a chilling ethnography of academic aisles: those oblique halls that can incubate both brutal (if hidden) politics as well as sincere acts of illumination and inspiration—in a word, higher education. In an age of increasingly diminishing returns for humanities scholars, and with the job market for professors a savage wasteland, we need to read accounts and reports from the field, the tragic misadventures of seeking steady employment, the petty funding and scheduling dramas that determine our lives.

At this point I am feeling slightly sheepish as a reviewer, as I have not included a single direct quotation from the book. But there’s a reason for this: Working the Aisles is also one of those books that the instant you finish it you give it to someone else to read. It’s a book that needs to be shared, discussed, and hashed out (not so different from another powerful book about academia, the 1965 novel Stoner by John Williams). Yet there is one line from the book that I can quote directly; it’s the first sentence, which right after I read I broadcast via twitter, because it struck me as a brilliant opening move: “The first thing you have to remember when you walk down the aisles of your local supermarket is that they do not love you.” Right away we get that this going to be a story about unrequited love, and all the pain, restlessness, and anxiety that come with this territory.

And Working the Aisles is profoundly sad and intensely harrowing at times—yet it also manages to elicit bursts of laughter, even a joyful sense of camaraderie (at least it did from this reader). It is a book that so deftly manages its narrative movements, intellectual struggles, and emotional energies, all while paragraphs unfurl and pages turn, that it actually warrants its definition of being a “book.”  This may sound obvious or odd, but in fact I think it is another way that this book rubs critically against its topic of consumption. For another thing that has become producible and consumable on scales vast and elaborately networked is the book itself. Consider print-on-demand, Amazon Prime, blurb.com (“Blurb and you. That’s how books are born.”), Kindle, Nook, goodreads.com (“Meet your next favorite book.”), CreateSpace, Scrivener…in this gulping, guzzling, swallowing, and spewing media-scape, what even is a book anymore?

Appelbaum has written a book that reminds us what a book is, what it can be. This is especially important for the “us” who are academics, whose writing can all too often seem destined only to the miserably predictable forms of monograph or edited collection. And this goes as well for creative writers, who must produce marketable forms at regular intervals (or else). But a book need not be another commodity in the chain of consumption—whether it happens for the bored traveler in the airport bookstore, in the academic’s abject file for tenure and promotion, or for the superstar novelist who delivers the same reading bookstore after bookstore before profitable book signings. A book might be something to be digested, maybe even something difficult to digest. Working the Aisles reminds us of this, of the pleasures and sorrows of life, and of reading—and how these things can be rendered in writing, written in a book.