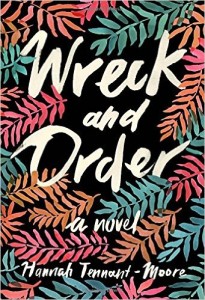 In Hannah Tennant-Moore’s debut novel Wreck & Order, the narrator Elsie drifts between boyfriends, low-paying publishing jobs, trips abroad, and drinks as she searches for pleasure and meaning in life. Her saddest moments, and these happen often, occur when the guy she’s having sex with comes, rolls over, and falls asleep. She craves her partners’ ability to relax.

I’m a writer the same age as Tennant-Moore, now working on my first novel, also about sex, travel, Buddhism, and self-realization. I bought Wreck & Order with fear, defensiveness and adrenaline. It was Friday at 6pm. I walked out of the bookstore feeling sick, afraid that her book was so much better that mine would be not only redundant, but an embarrassment. Girls on Fulton Street walked past me in tea-length dresses and denim jackets. Bikers coasting downhill held their hands up to a late-spring, orange, warm sunset. The terrace at Cafe Habana was full of happy people ordering frozen margaritas. I should have gone to a coffee shop but instead I went to my favorite bar. Even though I’m writer, I had to borrow a pen from the bartender to take notes in the margins.

I was sipping my first drink when I read these sentences about violence as power in sex: “Jared wanted to believe he had some and I wanted to give all mine away. I wanted bruises, empirical proof of the destructiveness of emotions.” A few lines down, Elsie elaborated, “We wanted more — longer strangulations, redder marks, deeper and murkier troughs of shame and forgiveness.”

I looked up at the tin ceiling. These lines felt true and surprising, offering new, dark definitions that challenged conventional thinking. Did I judge Elsie for wanting strangulation?  Did I judge Tennant-Moore for writing that Elsie wanted to be like the guys she hooked up with? “I wanted to come in some pretty slut’s mouth. Pull up my pants. Walk home — mind clear, body light.”  No, I didn’t judge them. I understood what that desire felt like. I wrote the word AUDACITY in the margin. I told myself to be more fearless and honest in my own book.

I ordered a second drink. Elsie’s boyfriend Jared ties his sweatshirt tightly around her head to lead her home from a bar blindfolded. Her compliance is described as “reflexive generosity, I suppose, to a clearly-stated need. Freedom from the pause, the self-conscious gap between thought and action.” Elsie had learned to cultivate and value that freedom in a meditation retreat and was proud to be able to apply it to her sex life. But I felt suspicious. So did the driver of a minivan, who followed the pair until Elsie showed her face, smiled and waved him away. There seemed to be a gap between the sexual roles she willingly played and the intelligence evident in her sophisticated and observant descriptions of the world. It was an inconsistency I recognized in myself, too, and in other women I know.

During my third drink, Elsie returns to Sri Lanka after being dumped by her fiancé, a stable, predictable man who bored and infuriated her. At this point I was invested as a reader because I cared about Elsie. As a writer I was excited to see how Tennant-Moore would handle a wealthy white girl’s trip abroad to discover something new about herself and about human existence. I wondered if she could do it without defaulting to the cliché of the East as a destination for spiritual healing.

Through Elsie’s friendship with a young woman named Suriya, Tennant-Moore richly describes rural life, local pilgrimages, and family dynamics. Here, too, male pleasure is prioritized, but this point is shown delicately, mostly in the kitchen. Suriya’s virginity triggers funny conversations in which Elsie corrects Suriya’s poetic broken English while they discuss Brazilian bikini waxes, hymens, and monogamy. By keeping the tone and themes consistent, Tennant-Moore uses Sri Lanka not as a salve so much as an alternative for Elsie to compare to her own life.

When considering how she differs from other Americans who live to work and spend money, Elsie thinks, “But what do I have? I have a full, active mind that brings me neither peace nor love nor contentment nor purpose.” Throughout the book she seeks cessation from the anxiety of that full, active mind. In Sri Lanka she finds peace swimming in a lake, sitting aboard a train the moment it enters the textural darkness of a tunnel, and, once her fidgeting has stopped and her limbs are numb, through meditation. Elsie defines these moments as joy. But joy passes quickly, and, like a magnet, her desires return to the mania of seeking satiation.

Reading Wreck & Order, I felt submerged in a chimerical mix of sadness: mine and Elsie’s. Themes from my life and my manuscript seemed to reverberate through Tennant-Moore’s prose. Boyfriends cheat and break your heart. They want to bang your head against the wall and you like their decisiveness. Sometimes the performance of romantic love makes you feel dead inside. You fantasize about violence more than intimacy. Traveling the world makes you confront your most ignorant self, and when you try to describe or find meaning in that experience, you risk exposing yourself as a privileged jerk.

Wreck & Order is not a feel-good book. It challenged me to reconsider feelings and experiences that I had labeled shameful and tried to forget. I recognized Elsie’s suffering, but she explained the logic and nuances to me in ways I hadn’t yet articulated. Like life, this book does not have a simple web of problems that climax and find resolution. Elsie’s is a ceaseless voice seeking moments of quiet. Some readers may find the novel chaotic. Others might not like Elsie or how she lives. As a writer, I was grateful for how Tennant-Moore emboldened and inspired me. As a reader, I didn’t want the book to end.

McKay McFadden is writing a novel about three friends hitch-hiking across Central Asia. She received an MFA from the University of Mississippi, where she was a John & Renée Grisham Fellow.