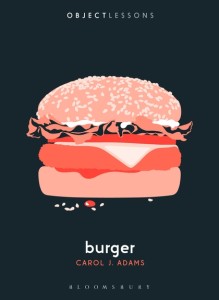 In her groundbreaking 1990 Ecofeminist classic The Sexual Politics of Meat, Carol J. Adams developed the thesis that the exploitation of animals—corralling, domesticating, abusing, slaughtering, and devouring them—is parallel to, or perhaps part and parcel of, the patriarchal exploitation of women. In Burger, one of the new books in the Object Lessons series, she takes on a smaller, but highly charged, subject: the peculiarly named hamburger.

Neither made from ham, nor a creation of the burghers of Hamburg, the all-American burger “is the citizen’s economic food choice, the everyman’s lowest common denominator.” The fact that so many American cities vie for recognition as the birthplace of the hamburger suggests the burger’s iconic significance as our ultimate, culture-defining culinary creation.

While Burger is not a full history of the burger in its multiple variations—that would take thousands of pages—Adams provides more fascinating details and insights in this compact monograph than most readers can digest in one reading. One learns that pork was the dominant meat consumed in the American colonies, with the primacy of beef coming only in the 20th century, the result of a long accumulation of interdependent, mutually reinforcing developments. These include factors as disparate as Northern European dietary preferences, the near extermination of the buffalo (and the indigenous peoples dependent upon them), domination of the Other (both plant and animal), the expansion of the railroads, the invention of barbed wire, the mechanization of slaughterhouse technologies (the creation of “disassembly lines”), the large-scale entry of women into the workforce, concerns about food safety, the search for efficiency and convenience, and more. Adams’ analysis is compelling.

Adams paints an impressionistic but clear picture of the hamburger as the perfect expression of American conquest, despoliation, and domination, the ideal, no-nonsense meal for a nation of businessmen and women on the move. The hamburger, especially in its manifestation as the ultimate commercial fast food, was the perfect source of cheap calories for the growing army of American consumers. Only in recent years have the full costs to human health, biodiversity, and the global environment been widely acknowledged.

Adams argues that the hamburger is environmentally unsustainable, an antiquated, unhealthy, unethical, and exhausted product of modernity. But what can take its place?

Given the ubiquity of the hamburger, food reform activists, Adams included, assume that some kind of burger-like food, preferably plant-based and highly nutritious, will be needed. The problem, of course, lies in selling this product to a world increasingly addicted to inexpensive, fatty, tasty beef.

It’s not that veggie burgers haven’t had a chance. Seventh Day Adventists popularized vegetarian foods in the mid-nineteenth century and successfully promoted meatless burgers during the years when the hamburger was becoming a dominant dietary staple in the U.S. Just seven decades ago, Middle America survived a brief brush with vegetarian meat substitutes when the lean days of WWII meat rationing led to a dramatic increase in consumption of bean and nut burgers. For a moment, it seemed possible that alternative burgers might earn a permanent place in the American diet, but postwar prosperity allowed a return to conventional life—and meat.

By the 1950s the veggie burger was a standing joke in popular culture, tainted with “crank” associations and presumed to taste terrible. (As taints go, the crank label is probably less harmful than the E. coli regularly found in hamburger meat.) To make her point, Adams quotes banter from The Seven Year Itch, the 1955 classic film, mocking “Soyabean Hamburger” as barely edible, appealing only to health nuts. Outside the U.S., of course, falafel and other precursors of the veggie burger have been staple foods for centuries.

Health concerns are already having an impact on the hamburger’s popularity, even among devout carnivores. Bill Clinton, the archetypical burger gobbling president, became a voracious consumer of veggie burgers after his heart scare. He must have also pushed them on his guests, for Adams notes that, “In six weeks in 1994, 4,000 Boca Burgers were purchased by the White House.” (Burger is loaded with intriguing facts and figures.)

Adams concludes Burger with an exploration of the “moon shot” burger, the name given to the experimental plant-based or lab-grown meat that, once manufactured on a large scale, promises to replace the all-beef patty, relieve world hunger, end the exploitation of animals for food, transform agricultural priorities, reduce greenhouse gas emissions, and possibly save the planet from the human species. As the name indicates, the moon shot burger’s development poses challenges.

Adams describes two basic approaches. The most obvious is to reinvent the vegetable burger, altering textures, adding flavors and oils to produce the nutritive and sensory experience of eating animal flesh. Several products claiming to do this are already on the market.

The second, more frightening, approach is to grow animal tissue in vitro, producing so-called “clean meat.” Starting with as little as one cell, it is now possible to grow massive quantities of animal tissue in vats. Meat without the animal, the abattoir, the suffering, and the waste. The technology already exists. “Clean meat” is currently being grown in labs and even served in burger form to a very few lucky diners. The problem is scale and therefore cost. Adams interviews scientist-entrepreneurs who are confident that they’ll bring affordable lab-grown clean meat to market in just a few years.

Of course, science fiction got there first. As a sixth grader, I was horrified by the description of “Chicken Little,” the “clean meat” protein source feeding the teeming masses of the future in The Space Merchants, a 1952 satiric (and prophetic) dystopian novel by Frederik Pohl and C. M. Kornbluth:

It was a great concrete dome, concrete floored. Chicken Little filled most of it. She was a gray-brown, rubbery hemisphere some fifteen yards in diameter. Dozens of pipes ran into her pulsating flesh. You could see that she was alive. (The Space Merchants, p 83.)

Pohl and Kornbluth describe in gruesome detail the feeding and care of Chicken Little, one of a slew of enormous chicken-tissue blobs raised on algae and synthetic nutrients, tended by a brutalized underclass of indentured servants. It’s the material of nightmares.

Here’s where Adams’ critical skepticism falters. In her enthusiasm for alternatives to the dominance, destruction, exploitation, and patriarchy implicit in the production and consumption of meat, she gives clean meat a pass, overlooking obvious questions like, why stop with beef or chicken? Why not cultured chimpanzee for the “bush meat” market? Deli counter tubs of songbird flesh? Hummingbird steak in slabs as big as briskets? Exotic meats for the Hannibal Lecters of the world? Perhaps this is too much for readers to ask. The ethical ramifications of clean meat technology are problems for another book.

In fact, what seems a horrific scenario might be a net positive in the big picture. Perhaps clean meat will provide part of the answer to the evils of our current systems of animal flesh harvesting, once production is up and running. Adams appears optimistic.

In Burger Adams shows how the hamburger earned its extraordinary popularity in the U.S., evolving in parallel with American culture to meet society-wide needs efficiently and inexpensively. It has since conquered the world for many of the same reasons. Now that the systemic, planet-wide damage this “perfect food” causes has become apparent, humans will need to move on, whether they wish to or not. Ultimately, Burger is a work of advocacy as well as literature and cultural analysis. As one of Adams’ section headings suggests, it’s time to go “Beyond Meat.”

Scott Lowe is Professor Emeritus of Philosophy and Religious Studies at the University of Wisconsin-Eau Claire, and the author of Hair. 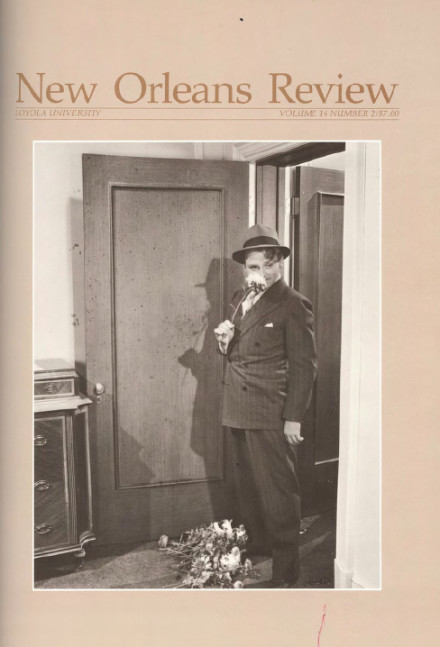 Thaw. Oasis of rotten grass, of concrete; puddles.
A dirty snowman in the neighbor’s garden. In front of the house,
the neighbor himself: a shadow in overalls, chewed up by his …

Like all good things this is chewed on. That’s her tongue in my cheek, curled up with my family and me. That’s her voice, those are her teeth biting my caution and wrists. She says we know what we’re doing, … 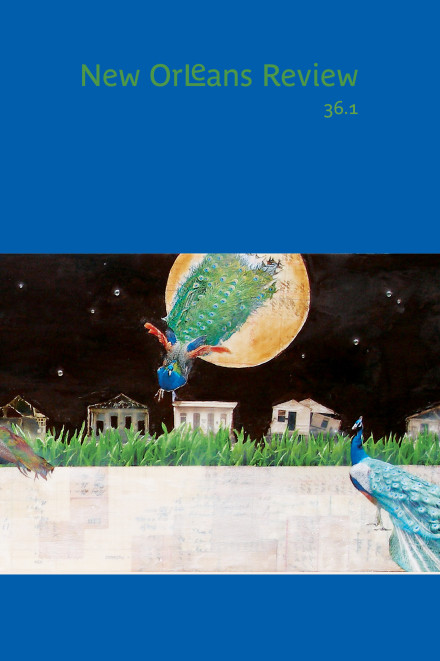 Why go into it when just knowing that
it’s there without you makes it more itself?
And who are those who don their boots and packs
and make of it an emblem of their freedom?
Is it then less a …

Babbs and Clean-Willy iron together in the buff.
You can see them. Babbs’ jelly-fish figure.
Clean-Willy the same but harder and hirsute,
like a balding chimp, smoking as he sprays starch.
They are half-drunk but diligent
in their ironing uniforms … 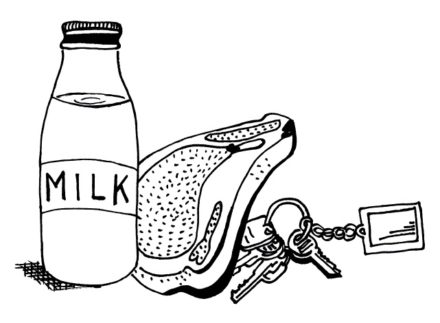 I always thought I was sick. I’d turn my head toward the window where the wind chimes swayed and beneath them baskets of crayons, the teapots we couldn’t fill with tea. Just cold water, they’d tell us. There was a …

Again, David Dotson sketches
shark’s teeth on a 40 mm grenade
with a Sharpie—the quick flicks of his hand
ripple the tendon under his elbow,
wrapped in black ink, a tattoo imprinted
in my memory. I laugh every time
he …