You are here: Home / Book Review / Apocalypse Not: The War That Never Was 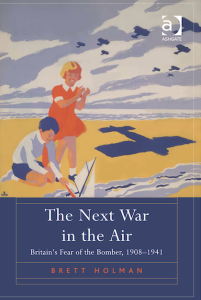 This dense monograph—a fifth of it is notes and critical apparatus—represents a great deal of work. Holman provides the reader with an exhaustive catalogue of (mostly) journalistic writings about the post-1919 notion that in a future war strategic airpower would not only be decisive, but cities would be annihilated in a matter of days, if not hours. There was no defense. The bomber would always get through.

It’s always good to be reminded of how journalists and experts get everything wrong. But the author seems not to realize this. Or perhaps he is simply being prudent: the legends of the bomber barons are firmly embedded in military fakelore; the palace guard of the emperor of strategic airpower does not take kindly to those who point out the absence of clothes.

The idea that strategic airpower would win wars all by itself, that cities would be obliterated in a few hours, was by no means confined to journalists. It was coded into the DNA of the Royal Air Force, formally accepted by British prime ministers, and duly became Holy Writ for anyone who had the slightest interest in a country’s national defense.

The counterfactuals are grimly entertaining.

In fall 1939, RAF losses in the first bombing raids against Germany were so heavy that bomber crews would only fly at night.

In May 1940, the RAF lost 70 percent of its bomber force in about ten days. In both cases, the losses were mostly due to antiaircraft fire.

So much for the idea that the bomber would always get through.

But in a population of 80 million, this was hardly obliteration. Nor was a loss ratio of three civilian noncombatants to every trained airman much to celebrate. Grotesquely, most of those civilians were people who contributed nothing to the economy. A horrific calculus could be devised that might suggest those losses were net benefits to the war effort.

In terms of what purported to be the stated aim of destroying industrial capacity, the campaign was basically a failure. German armaments production skyrocketed. It began to collapse in the fourth quarter of 1944, and the airpower apostles subsequently claimed that this validated their theory. The real cause for the decline was that the Red Army had overrun the Romanian oilfields by August 1944, together with other areas supplying the raw materials Germany needed for arms production.

The best that can be claimed for the bombing campaign is that it forced the Germans to divert valuable resources to air defense systems. True enough, but that is to overlook what in economics is called opportunity cost: what else could have been achieved had those tens of thousands of planes been used to support the actual fighting?

It is instructive to note that, unlike the British and the Americans, German military doctrine saw the air force as exclusively devoted to supporting ground forces. The major German military successes of 1939-1941 suggest the idea was sound. Interestingly, Walter Wever, the architect of he Luftwaffe, explicitly ruled out strategic bombing. Not on moral grounds, but because he doubted its effectiveness.

He was right. Buried deep in the exhaustive surveys conducted after the war is a camouflaged but explosive conclusion. The bombing campaign did not have any real effect on the on the determination of the natives to fight, an idea that is anecdotally confirmed about the attitudes of both the British and the Japanese.

In a sadly predictable result of what Merton called the Law of Unintended Consequences, it enabled them to resist assuming institutional responsibility for the actions of their governments and institutions. As to why the Germans accepted more responsibility than the Japanese—insofar as they did—the answer is simple: Germany was physically occupied by invading armies who fought their way into the country; Japan was only occupied after it surrendered.

As Holman points out, the hysteria of the 1930s about airpower is nicely paralleled by later fears about nuclear war. In this regard it is instructive to notice that Japan did not surrender because of the atomic bombs. It surren­dered—grudgingly and not without a failed military coup—because the emperor decided to end the war, and key military personnel refused to go against his wishes. The skeptics should see the excellent Japanese fictional documentary on the subject, Japan’s Longest Day.

Just as in the 1930s it was believed that in the event of war, airpower would rapidly reduce cities and destroy their populations utterly, in the 1950s the same was said of nuclear warfare—which of course would be much worse.

As to the former notion, the worst example of this in Europe was the bomb­ing of Dresden, definitely the European city to be the most devastated. For a variety of reasons, the death toll is difficult to compute, but the highest figure is 125,000. As there was absolutely no reason to bomb the city at all, the losses were appalling, but even using the highest number, it appears that four fifths of the inhabitants survived: in 1946 the city had nearly half a million inhabitants. Appalling damage is by no means the same as annihilation.

The same can be said for Japan: the bomb dropped on Hiroshima killed a good third of the population and leveled 80 percent of the city. Today it has three times as many inhabitants as in 1945, and is home to one of Japan’s most sophisticated automobile manufacturers. The specter of annihilation from the air was a fantasy. Perversely, the more obvious the failure, the more determined its adherents were. There’s a lesson there somewhere.