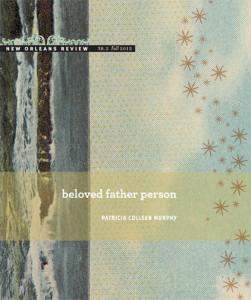 At the end of October when I call my dad in Ohio he sounds like a trucker. His voice a box of rocks. I am on my way to campus to teach a weekly class. I don’t like to drive anymore so I always call him and say, “Will you take me to school?” Twenty-five miles, twenty-five minutes.

When I ask him will he go to the doctor he says, “Yeah, okay. If it’s not better tomorrow.”

The next day I call and Billy answers. I have not seen my older brother in sixteen years. He has some addictions. We all do. But in that house, in the four years between his high school graduation and mine, my brother covered every flat surface in his basement room with stacks of pornographic magazines sorted alphabetically and by date. The pornographic videos spanned four shelves of the wooden bookcase next to the television in the living room. My frequent complaints to my father went unheeded. Dad had no sisters and understood very little about young women. He felt it was a harmless distraction.

I returned home from long shifts as a hostess at the Olive Garden to find my brother pants-less on the La-Z-Boy. When he heard me open the door he always hopped up, his erection barely covered by the over-sized Stanford T-shirt my mother bought from her alumni catalog.

My brother and I have spoken only a few times since I moved to Arizona. There was a phone call on his 40th birthday when he told me how he would celebrate, with Arby’s. Enough for a family. I hung up the phone feeling like I might want to disappear.

And so he has remained in our father’s basement. He has never paid a bill. He and Dad used to go to the Outback Steakhouse together until Billy got too big to sit anywhere.

That’s five of me. I begged my father: Move him out. Just buy him a condo. What are you afraid of? Why do you feel so guilty? You’re not helping him. He’s going to fall through the staircase.

Now Billy’s on the phone. He says, “Dad doesn’t want me to tell you this, but he hasn’t left the house for five months.” Five months. I do the math. Our mother dropped dead of a heart attack in her Las Vegas condo that June. Five months ago. My parents have been divorced now for longer than they were married. Dad refers to Mom as The Unspeakable One. But now my father hasn’t left the house since my mother died?

“And I guess I should have mentioned this. I noticed the other day that his eye was weeping.”

“He had a tissue pressed against it. I think he’s fine. I don’t know.”

“Has he lost any weight?”

“How would I know? Everyone looks skinny to me.”

This is a formidable task. Dad is in his second-floor bedroom. Billy has to climb a flight of stairs. Walk through the hallway. Climb another flight. I hear his footsteps, heavy breathing, a few words with my father.

“Yeah,” Billy says. “He may have lost a few pounds. But he looks okay to me.”

I ask my brother again if I should get on a plane.

“I don’t think so. Though talking about this is making me feel scared.”

I call my partner John. I buy the tickets. I call my father and tell him we are coming.

Patricia Colleen Murphy teaches creative writing at Arizona State where she founded Superstition Review. Her poetry and prose have appeared in numerous journals, including The Iowa Review, Quarterly West, American Poetry Review, Gulf Coast, and Indiana Review. “Beloved Father Person” is an excerpt from her memoir-in-progress.