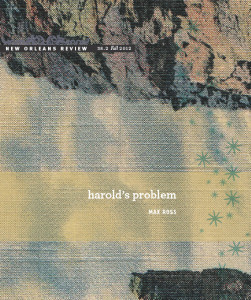 As on the last several Saturday afternoons, Brian Ward, a 56-year-old illustrator of considerable local renown, was counseling his friend on how to preserve his marriage. The effort, as always, was hopeless. Ward’s friend, the hedge fund manager Arnold Greenblatt, had already separated from his wife and, despite his despondency about the empty-bedded perils of bachelorhood, Greenblatt refused to make any effort toward reconciliation.

They were in Ward’s TV room, watching a college football game to conceal from any potential observers that they were having a serious and emotionally sensitive conversation—Michigan was beating Michigan State. Rather than directing their words to each other the men spoke at the television, as if it were a tennis net over which they needed to hit their advisory serves and volleys. Each rested his glass of Malbec on his stomach (each had an orb-like stomach that often doubled as a shelf); the wine bottle was on an end table, resting on the small square wicker coaster that Ward’s wife, Samantha, had placed beneath it during the first quarter, before she’d gone out grocery shopping.

“Just take her to do something you know she likes to do, but you’re neutral on—a museum or a lame movie or something,” Ward said. As he spoke he drummed his fingers, whose cuticles were stained black with charcoal, against his wineglass’s stem. “And if you do that, it will be very obvious you’re doing something just for her. She’ll respond.”

Before speaking Greenblatt paused, as he always did, and breathed out through his nostrils, producing from his sinuses a high-pitched wheeze. All decisions, even interpersonal ones, he treated as business transactions, eyes flickering around in perpetual calculation.

“There’s no way that’s going to happen,” he said.

The two had met five years prior in a film-discussion group their wives signed them up for, and had bonded because they’d both disliked The English Patient and had been able to articulate, venomously, why, scandalizing and alienating themselves from the rest of the group. For men like them, the ability to critique incisively was admittance to an exclusive club, its membership reserved for those able to judge the world with unsentimental, levelheaded clarity. Greenblatt had made fortunes for himself and his clients by investing in companies whose value only he’d discerned; Ward’s drawings and paintings—messy yet precise, filled with figures whose muscles seemed to flash and flex on their skins’ exteriors—depended on tireless, usually sober observation of the human form. Now Greenblatt, not for the first time, conceded his unwillingness to reconcile with his wife (their $140 million divorce settlement would soon be reported in all of Minnesota’s daily newspapers) and when the football game finished he departed Ward’s home for the penthouse apartment he’d recently leased, and whose big echoing emptiness and unfamiliar furniture he’d promptly come to despise.

Ward remained on his sofa, a fluffy white thing that he’d stained in several spots with charcoal and black ink, so it now had a zebra-ish quality. Blotches of red wine were here and there, too. He poured himself another glass of Malbec and watched the beginning of another game, which he cared no more about than he had the previous. In fact he didn’t care at all about football, or at least, he didn’t ever care who won. But Ward liked the violence of the players colliding; he thought this the game’s worthwhile aspect. To Ward there was no meaning in winning or losing, in the game’s implicit battles—home versus away, and its corollary: good versus evil. He was unexcited by the crossing of arbitrary lines to score imaginary points that had no real-world currency. The game itself was pointless; the game was a game. But the violent entanglement of body with body couldn’t be denied its appeal. When all of football’s valueless metaphors were stripped away, there were still 11 men wrestling 11 other men, trying to assert dominance, to do harm. This Ward could enjoy. He believed the game would be more telling, in terms of human nature, if played without a ball. Three separate match-ups were showing on various network channels, and he flipped between them, sipping his wine and trying not to spill, until his wife reminded him it was almost time for their date.

Ward was having his own marital problems. He and Samantha had begun to go to bed at increasingly divergent times, to cook separate meals for themselves and eat in front of separate televisions; she never accompanied him anymore when their Golden Labrador needed to be walked (and Ward was thankful for these 15-minute doses of solitude); generally, they’d made once-tandem habits into individual activities.

Mostly Ward blamed himself. He suspected the discord stemmed from an existential funk that had enveloped him for the last eight years; everywhere he went, it felt as if he were in soaked clothes and dragging seaweed. He’d convinced himself that nothing he’d accomplished in his art or life meant anything; that he’d become too obedient to the civilizing forces—marriage, family, money—he’d once so urgently disdained. To allay his unhappiness, he’d begun investing more and more of his time, which he felt was too quickly dwindling, into practicing piano, shooting pool, doing several pectoral dips and incline sit-ups each day on his new basement workout console; that is, like so many men in late middle age, he’d resumed the activities he’d excelled at in high school, in an attempt to restore his senses of vivacity and worth. Nothing, though, was working.

For the last 30 years Ward had been a successful, respected, and playfully subversive member of the Minneapolis arts community. He’d led illustration classes in the city’s most ivy-garlanded and fussily selective institutions—the College of Visual Arts, the University of Minnesota, the Minneapolis School of Art and Design—where he warned his students not to go to art school (“because if you end up not doing art, you’ll have only a really shitty education to fall back on”); he’d had solo shows in various downtown galleries where people sipped wine and whispered praise behind his back; he was frequently solicited to design magazine covers and images for the city’s best-funded publications; for a time he’d had a weekly column in the state’s most widely read newspaper, the Star Tribune, in which he warned people not to go to museum exhibits (“because nothing interesting or provocative can ever happen in a museum”). But once he’d started making money, money became the basis of his work. The merrily destructive muses of his 20s and 30s—inadequacy, depression, aindignation—that had once fueled his art (and before that, fueled his proclivities for dropping LSD and manufacturing explosives), had now focused on his wife; all his aggression, he found, was directed at her. In response, Samantha had cultivated an anger no less strident than her husband’s.

They hoped their enmity would pass. Ward allowed himself to be brought along to museums, to the opera, and to Sunday mass, where he would sit glumly with his hands stuffed in his khakis’ pockets as the pastor lectured about charity or shame, doing the facial equivalent of straightening his posture whenever Samantha looked his way. Yet none of these outings relieved his need to express his disgruntlement; rather, they constricted him further.

One evening, Ward and Samantha attended a concert put on by the Russian Patriarchate Choir of Moscow at the Basilica of St. Mary, a big gothic church in downtown Minneapolis. A dozen male singers dressed in burgundy robes harmonized in soulful, Slavic voices, and it was all no doubt impressive, but Ward had trouble appreciating anything happening on the stage. Gently, apologetically, as if informing her he’d just broken her favorite vase, he told Samantha he wanted to go home and play his piano. During intermission he walked alone back to their neighborhood, turning over in his mind the conversation he’d had earlier in the day regarding Arnold Greenblatt’s impending divorce. Was Greenblatt’s unwillingness to compromise with his wife mere childish stubbornness? Or was it something more mature—a realistic appraisal that something dead was, in fact, dead?

Kenwood, where the Wards lived, is Minneapolis’s poshest neighborhood. Its prototypical residents are educated liberals who support all tax increases and social rights movements. Their luxury sedans are nearly silent as they accelerate from full, conscientious stops at neighborhood stop signs, and their children attend expensive, secular, private schools. Many of Kenwood’s houses seem actually to be large cottages—simultaneously quaint and grandiose, everything constructed from bricks, marble, and gingerbread. The Wards’ place on Summit Avenue was a three-story redbrick structure, its front door flanked by two faux-Roman columns that held up nothing. With its unbarred windows and a motion-detecting light that was evidently out of batteries, one could easily see why two enterprising criminals from Gary, Indiana, might assume it to be a burglar’s wet dream. The home’s interior obeyed the messy chic characteristic of bohemians who’ve stumbled into money. There was a garage-door-sized dining room table that Ward sometimes worked on, its oak surface divoted from his pencils and pens. The table was attended by eight uncomfortable wooden chairs, one or two of which were always in a state of squeaky disrepair. The kitchen’s predominant feature was a double-size stainless steel refrigerator, which contained the yoghurts and fashionable produce that comprised the Wards’ ethically guilt-free diet; the stuff on the lower shelves was usually moldy or getting there. In the basement was evidence of Ward’s failed hobbies: his pool table, his Precor multipurpose Strength System, his slowly growing collection of antique shotguns and pistols. An early-model intercom system united all the rooms, although Ward and his wife rarely communicated through it anymore.

When he got home from the concert, Ward slid back his Yamaha’s lid and, after resting his lowball of scotch on the music stand, began to play a Beethoven sonata. If one watches him practice—say, through his home’s front window—it’s apparent that Ward is something like a medium for the music. His eyes closed, his torso slowly swaying as if underwater, left ear lowered down close to the keys, Ward appears possessed. His immersion in the Beethoven, he explained, is why he didn’t hear (or heard, but didn’t worry about) a crash in his kitchen as he worked through the first movement. “I was uninterested in anything happening around me,” he said to me. “I was in my little zone.”

When he heard a second noise, though, Ward turned from the piano and, peeved at having been interrupted, expected to see his wife. Actually what he saw were two men in ski masks sprinting toward him, each carrying a butcher knife.

Max Ross’s writing has appeared in American Short Fiction, The Star Tribune, The Boston Globe, and elsewhere. He is an editor at Open Letters Monthly.