You are here: Home / Book / Interviews from the Edge: 50 Years of Conversations about Writing & Resistance 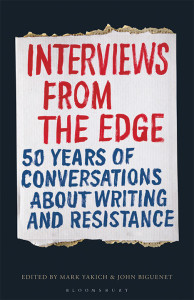 “A fascinating half century of conversations with some of the most influential writers of the last hundred years . . . a brilliant work of depth and scope.” —Seattle Book Review

“Focus[ing] on both the subjects’ artistic output and personal engagement with racism, sexism, capital punishment . . . [t]hese unusually candid conversations with authors . . . offer perspectives on aesthetics and the realities of resistance that will appeal to a range of writers and readers.” —Library Journal

“Writers of all genres will be inspired by discussions with twenty-four authors and activists . . . who share their unique perspectives on a wide range of topics covering the aesthetic and social aspects of writing.” —Poets & Writers

New Orleans Review is delighted to announce the publication of its first book, Interviews from the Edge: 50 Years of Conversations about Writing and Resistance (Bloomsbury 2019).

Edited and introduced by Mark Yakich (Editor, 2012-) and John Biguenet (Editor, 1980-1992), Interviews from the Edge presents a selection of conversations, drawn from 50 years of New Orleans Review, that dive head-first into the most enduring aesthetic and social concerns of the last half century. From reflections on the making of literature and films to personal accounts of writing inside racial divides and working against capital punishment, the writers, poets, and activists featured in this book offer not only a fresh perspective on our present struggles but also perhaps a way through them—for writers and readers alike.