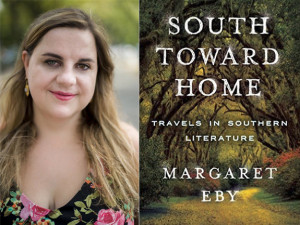 Birmingham, Alabama, native Margaret Eby returned South from her adopted home in New York City to write a travelogue about the towns where the stories of the Southern canon take place, as well as the authors who lived and worked in them. The result of her visits to Jackson, Mississippi, Monroeville, Alabama, Oxford, Mississippi, New Orleans, and other haunts is a new book, South Towards Home: Travels in Southern Literature.

Eby goes through the hometowns of her heroes—including Eudora Welty, Harry Crews, and Flannery O’Conner—to grapple with the ways these authors were drawn to or critical of the places they came from, sometimes in the same breath. Some of the writers Eby looks at have come to define the towns they wrote about, while others have been erased from collective memory. Harry Crews, for example, is not publicly remembered in Bacon County, Georgia, though he wrote about it with a fervor that betrayed his inability to forget the place.

The relationships between authors and their hometowns that Eby describes are their most interesting at their most contentious. Even Flannery O’Connor’s work is remembered with mixed emotions by Milledgeville: “That’s some pretty weird stuff,” Eby quotes one store clerk saying.

Eby dismantles the idea that Southern literature is engrossed in and limited by small town detail. By illuminating the nuances of the relationships between the authors and their homes, she reveals how they reflect the universal conflicts between hometown and individual, between past and future. Your home will always have a pull, whether or not your home is the South.

Eby’s writing has appeared in the New Yorker, New York Times, and the Paris Review, among other publications, and she was previously the associate editor of Brooklyn Magazine.

Room 220 will celebrate the release of South Towards Home at 7 p.m. on Wednesday, November 18, at the Antenna Gallery (3718 St. Claude Ave.) with an event that also features authors Alex Mar and Justin Nobel.

Room 220: You write that your selection of authors is a personal one. What made you to choose these particular authors? Is there anyone you wished you could have included, but lacked the space for?

Margaret Eby: The original plan for this book was much longer and included a lot more people. The editor of this project, Matt Wyland, who is fantastic, helped me focus in on what I wanted to say about the South and what every author articulated about the place. I would have loved to include Zora Neale Hurston, for example, or Tennessee Williams. But I needed to concentrate the book so it was a reflection of the state of the South, as I understood it, rather than an encyclopedia. I hope at some point I do get to write more about some of the people I left out, particularly Hurston, Alice Walker, and a fabulous Mississippi writer named Ellen Douglas. I wasn’t able to include everybody, but I’m happy with how the book turned out. I wanted everyone in there to be saying something a little bit different about it. 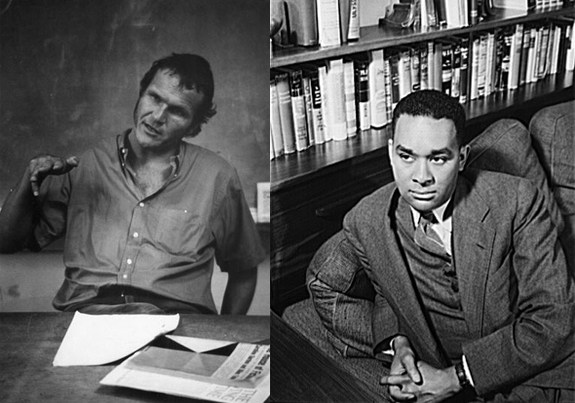 Rm220: Much of your book focuses on the importance of home to Southern writers. How do you, as a Southern writer, fit in to that story? And how has living in New York changed how you look at the south?

ME: Like a lot these writers, I grew up in the South but I left the South. It wasn’t until I moved to New York that I looked at my upbringing in Alabama and recognized that it was different than a lot of my peer group in Manhattan and Brooklyn. I figured out what was really special about it. Coming from New York, to go back to the South had the advantage that I was both an insider because I had grown up there and an outsider because I had been apart for so long.

A lot of this book is about home not just as a physical place but as a kind of construct that you have built out of the stories you tell yourself about home. Home is something that’s almost universally important to people, and the way that you define home speaks a lot to who you are. I think every author in this book is telling a different story about home and their relationship to it.

Rm220: Your final description of Southern literature says it is “about preservation, marking out the idiosyncrasies that distinguish one region from others, and it is about a kind of controlled destruction.” Does your book aim to distinguish the South as a region even more so than its literature already does?

ME: I think that this book is a conversation about what the South is and how we define it. Obviously it’s a huge region and there are many different kinds of South and many people who believe different things about what it means to be from there. But right now, there’s a pretty pervasive idea of what the South is, and a lot of the books I looked at shared that idea: certain small-town thoughts and certain values. But a lot of them also deal with figuring out what parts of the South’s past are worth preserving and what things are really worth examining and discarding. Because there’s no way to really talk about the South without talking about the fraught past of the Civil War and the Civil Rights movement and deeply rooted racism. That isn’t something that I think most southerners want to keep around as a distinguishing mark of the region. And nor is it, exactly—it’s certainly been a problem in the whole country. But I think part of it is thinking about what it is to be a cultural Southerner: What are the values? What do you define yourself by? And what don’t you define yourself by? While I was writing this, I was in a conversation with these writers about the things that we keep and are proud of and the things that we shouldn’t ignore, but that we should fix and not continue into the present.

Rm220: You write that many of these authors would “chafe” at being called Southern writers. Why do you think that is?

ME: I don’t think that anyone likes to be qualified. I don’t think anyone wants to be known first as a Southern writer or a woman writer or a Black writer. You want to be a writer first even if you’re proud of that identity. Southern writing has come to have a pejorative label. There’s a certain dream of the south where someone says Southern literature and in the back of your head, dueling banjos starts playing. It locks you in to a certain set of themes and subject matter that are not that reflective of the southern experience. But a large part of it is just who gets to be unlabeled writers. When you think about a canon, who gets to be just a writer who is one particular kind of writer?

Rm220: What do you think the act of memorializing a home says about the relationship of an author to their hometown, after seeing all the different ways these authors have been memorialized?

ME: The process of memorializing tells us a lot about the way that the author was thought about in his or her own life. For example, there’s very little of Richard Wright in Jackson. Richard Wright’s books were banned in the state for years, so the little bit of recognition that is there is kind of going back and memorializing him rather than recognizing his talent while he was alive and celebrating him. The way that writers are memorialized really speaks to what their literary community is supporting. That’s why I think there should be more memorials at homes of writers of color, and women in particular. My book was very heavy on women writers. That’s certainly not the norm in the wider literary community.

Rm220: If you could curate the museum about one of the authors whose homes were not preserved, whom would you pick and what would you want to make sure to display?

ME: I do wish that you could walk inside Richard Wright’s childhood home. I kind of wish more of the things he talked about in Black Boy in general were preserved. There’s an area in downtown Jackson where he worked briefly that is in this midway stage of rehabilitation that I wish you could walk down.

The number one and most important thing to keep in an author’s home are books. When you go into an author’s home and there are no books you just feel like, “Oh, this is not true, this can’t be right.” Sometimes it’s a little bit too neat and it seems like the beds have never been unmade, so if I was curating anyone’s house I would like to leave just a little bit of messiness.

ME: I think they’re linked. The belief that the South created great writers was both an annoyance—because writers were expected to meet a certain set of stereotypes—and a challenge. I think that it ended up producing more than writing. For example, before Faulkner, Oxford was a college town. After Faulkner, with the establishment of the annual Faulkner conference and Square Books, Oxford has become known as a literary hub of the South. In the end, I think that you can only really write like yourself. If Barry Hannah were trying to write like Faulkner, it would never work. He was always bound to write like himself. Being a Southern writer does provide you with these stereotypes and canned narratives, but it also offers the opportunity to transcend and refute them.