You are here: Home / Book Review / Mr. and Mrs. Doctor 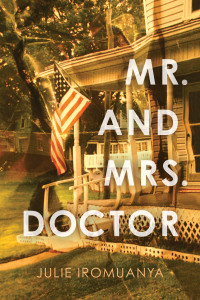 In the Bible, God tests the faith of Job by taking away his servants, slaughtering his plentiful herds of livestock, and murdering his children. After these calamities, Job shaves his head and takes off his robe, declaring that “the Lord giveth and the Lord hath taken away.” The moral of the story is that Job refuses to blame God for his bad fortune, maintaining his belief in God’s will. In Julie Iromuanya’s debut novel, Mr. and Mrs. Doctor, the protagonist, a Nigerian immigrant living in Omaha, shares his name with the Biblical Job, though he is not tested by God but instead by America.

The novel opens on Job Ogbonnaya’s wedding night in Port Harcourt, Nigeria. He’s travelled from America to enter into an arranged marriage with Ifi, a woman in her late twenties who Job chose from a photograph. When Job tries to seduce her using techniques he’s gleaned from American porn, Ifi rewards him with kick in the stomach. It isn’t until he risks humiliation by dressing in her clothes, “potbellied, tangled curly hairs escaping the bra, straps crookedly balanced on his broad shoulders, smudged red rouge covering his mouth,” that Ifi accepts him. The scene gives us the relationship dynamics—mutual befuddlement, strained communication, and strange tenderness—that provide Iromuanya with the engine of her novel. Omaha—and the larger America it encapsulates—is a cul-de-sac in which the characters are trapped.

To live up to the standards of the American Dream, Job and Ifi build their new life on lies. Ifi thinks she is going to be a doctor’s wife, but Job is merely a nurse’s assistant, changing the bedpans of elderly patients while Ifi transforms their roach-infested apartment into a palace in her letters home to Nigeria:

There are already four bedrooms, but because my husband is considering the inclusion of a home library to store all of his medical diagrams and journals, we are discussing with contractors the possibility of adding a fifth room.

Aunty, she concluded, you would not recognize me for the skinny girl who left home.

Iromuanya has said that Job is a character who haunted her fiction for years, popping up in stories until she finally decided to devote a novel to him. It’s easy to see why. He’s a complex, beautifully realized creation, difficult to sympathize with and at the same time difficult to dislike. As a financially struggling person of color in middle America, Job is an ideal vehicle to tackle the complexities of immigrant life. Both Job and Ifi, for example, have difficulty understanding their relationship to native-born blacks. In one scene, Job enters a convenience store and is mugged by a group of black teenagers. Afterwards, Job is confronted by suspicious police who ask if he’s a drug dealer. As he waits in the police station, Job funnels his rage toward an elderly black janitor:

Of course he had nothing to do with the attack, but instead of the wrinkled face, chin ashen with gray hairs and body stooped with age, all Job could see and hear was the man’s skin color and the voice carrying the rhythm that sounded so similar to the young boys’ voices. A fresh chill of fear climbed up his spine. Long ago, this old man had been one of those young boys, wearing women’s hose over his plaits and trousers so low they exposed his underpants. Akatta, he said to himself. A black American. Riffraff, Job decided with such bitterness and anger that it turned to hate, just like those criminals.

Iromuanya easily inhabits Job’s mind, capturing the slight formality of his speech, the way he uses terms like “hose” and “plaits.” Her insight into his character, shows itself again when America threatens Job in the form of the muggers and he retreats into his feelings of otherness while retaining his faith in the American dream. In fact, most of Job’s panic about the mugging is that the teenagers have stolen his car, which contains the work clothes he hides under the front seat for his secret job as a nurse’s assistant.

Although Job is the novel’s heart, Ifi is a critical counterpoint. When Ifi befriends one of the teenagers who mugged Job (to Job’s understandable chagrin), her perspective on race is nearly as misguided as Job’s open prejudice: “Ifi called [Job] a racist. She told him she did not see color. In America, everyone is equal, she thought. She said all the things she had heard on television and read in newspapers.” Unlike Job, who makes friends and works two jobs, Ifi is trapped at home with an irascible infant, taking comfort in reading home design magazines and making soup. Despite her desire to fit in and her acceptance of American platitudes, she is the one who never stops longing for Nigeria. The tension between the couple—Job’s unwavering belief and Ifi’s unshakeable skepticism—pulls the novel toward its climax.

Perhaps it goes without saying that all well-wrought novels should be able to tackle Big Themes—racism, domesticity, marriage, parenthood, displacement, financial insecurity, aging and disillusionment, to take some examples from Mr. and Mrs. Doctor—without losing sight of the quotidian, but Iromuanya’s skill is noteworthy. In one short scene, Job and Ifi take Ifi’s visiting Aunty to witness the annual migration of the sandhill cranes—or “sandhill cranks,” as Job and Ifi call them. They go with friends, other Nigerians who have recently had a stillborn son. At dawn, they wait with a crowd beside the Platte River, “dark blue with sharp folds, like seams.” His friends’ children squabble, eating candy; Job and Ifi are chilly with each other after a recent argument. They are both anxious to impress Aunty, whose visit to America has thus far most consisted of helping Ifi make soup. Suddenly, “A collective gasp escaped … one after another, the cranes shot forward with their wings thrown like flipped umbrellas.”  Looking around at his group, with its fraught companionableness, Job is “overcome.” Later, as he drives home, Job is astonished to see another group of cranes directly overhead, out of sync with the rest of their migration group:

In awe, Job’s eyes left the yellow lines splitting the highway ahead of him and took in the moving sky. Just then, a spatter of bird excrement painted his windshield. For the rest of the way home, his vision of the sandhill cranes’ grand flight was obscured by four white streaks of shit.

America giveth, and America taketh away.