You are here: Home / Interview / Nathaniel Rich: None of the Bad News is Made Up 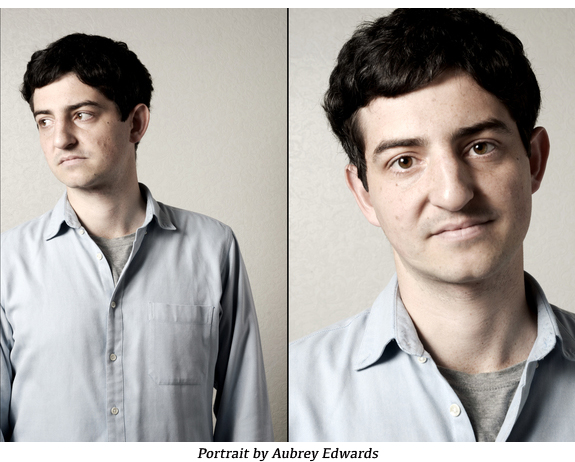 Someone quipped at last weekend’s Tennessee Williams Festival that Nathaniel Rich’s new novel, Odds Against Tomorrow (FSG, 2013), was the best Katrina book set in New York City. This observation conceals a degree of truth beneath its corniness, since Rich—a New York native—began his novel about a hurricane hitting New York City six years ago, before moving from his hometown to New Orleans in 2010. Shades of post-Katrina New Orleans are everywhere among the skyscrapers and brownstones of Rich’s flooded Manhattan.

In the book, one encounters vast and detailed descriptions of catastrophes of every stripe—from earthquakes to plagues to cyberwar—from the paranoid perspective of Mitchell Zukor, a young math whiz in the employ of a boutique Wall Street firm that specializes in disaster consulting. When the storm hits, Mitchell and a co-worker/love interest named Jane must escape the city, and as they do the real-world effects of disaster refract through Mitchell’s psyche, which has been molded by years of obsessing over precisely such a scenario. By the end, Mitchell’s mind has metamorphosed.

Odds Against Tomorrow is a fast read, which flattered Rich when I told him as much. “That’s exciting. That’s what I hope for,” he told me. “It was important for me to have a thriller pace, or a noir pace in a sense that the main character is going deeper and deeper down a dark passage.” I speculate the speed of Rich’s prose has something to do with his constant writing for magazines, which often demand greater briskness than literary fiction—he contributes regularly to New York Review of Books, New York Times Magazine, Harper’s, the Daily Beast, and others. He began writing Odds almost immediately after finishing his first novel, The Mayor’s Tongue, and he told me he has already dived into another.

Rich will celebrate the launch of Odds Against Tomorrow at 6 p.m. on Thursday, April 4, at Garden District Books (2727 Prytania St.). He will also read as part of Room 220’s LIVE PROSE reading series on Thursday, May 9, with Rachel Kushner and Zachary Lazar, at the Press Street HQ.

We spoke last Friday in my backyard about his book.

Room 220: There’s a lot of talk of Wall Street and high New York finance in Odds Against Tomorow, which you began writing just before the crash in 2008. Since then, there was the bailout, TARP, Occupy Wall Street, etc. How did the increased presence of that narrative in the national conversation affect what you were doing with the book?

Nathaniel Rich: I had the idea in 2007, before the crash—I had finished a draft of the novel by the time Lehmann Brothers went down. But when I reflect on it now, I think everyone kind of knew there was shady shit happening on Wall Street—we didn’t understand it entirely, and we might still not, but I think even before it happened and cable news started reporting on it, there was a sense that something corrupt was going on. It was in the air. Then when it happened, I was able to articulate the details a bit more.

Rm220: In his Paris Review interview, Norman Rush talks about a genius character named Denoon in his novel Mating: He says, “I felt a need to prove to the reader that Denoon was an intellectual of a certain caliber. I didn’t want the narrator saying, ‘Oh, trust me, he’s brilliant.’” With Mitchell Zukor, you’re writing a math genius. What sorts of things went into creating that authentic or believable genius?

NR: Like anything in fiction, you have to be an expert on what you’re writing about, or at least give the appearance of expertise. It’s true of writing about a math genius in the same way it’s true about writing an unhappily married suburban father, or writing a female character. Math, in fact, is easier, because nobody really knows about math geniuses, so you can fake it a little more easily. It’s a lot harder, say, for a male author to have a convincing female character, because half of your audience already putting you up to extreme scrutiny. But there are very few math geniuses. The character is derived in part from biographies of famous mathematicians and scientists—Einstein, Tesla, Edison, Bobby Fischer. I had to learn the basic math—probability and statistics—but a lot of that was surprisingly easy.

Rm220: Mitchell also has an encyclopedic knowledge of New York City and all these catastrophe scenarios. What sort of research went into making those depictions?

NR: Everything in the novel that appears factual is drawn from real research. I studied a lot of government reports, especially predictions about flooding and hurricanes. I read a lot of books about catastrophe prediction and disaster planning. As I was writing, I would look up various charts and maps from academic or government sources. None of the bad news in the book is made up, which is why it’s scary. But it has to be that way, because if something in the novel were false, everything would lose credibility.

Rm220: Did you have to go back and revise at all once Sandy hit?

NR: I was editing the final proofs when Sandy hit. I had to change one part where Mitchell’s reviewing previous flood scenarios in New York City and there’s a sentence that says something to the effect of, “Most recently, in 1992, a Nor’easter hit, flooding the subways.” So I had to insert something there about Sandy, but I didn’t have to rewrite any of the technical stuff about the storm itself—the degree of the flooding, the evacuation routes, the flood zones. I was worried that I would have to, but the truth is that the Army Corps of Engineers and the Office of Emergency Management predicted it all very precisely before the storm. So I was drawing from predictions that were proved quite accurate.

NR: One thing is that I knew it could have been a lot worse—and there will come storms that will be a lot worse. It was only a Category One. If it was a Category Three like it is in my book—or worse—it would have been much more upsetting for obvious reasons, but I also think you’d have to cancel the book, because it would be like publishing a novel about the bombing of the World Trade Center right after 9/11. So I was relieved that wasn’t the case, and to some extent I was relieved that nothing that happened—as surprising as it might have been to some of the reporters covering it—came as a surprise to anybody in the government or any scientist who had studied it. 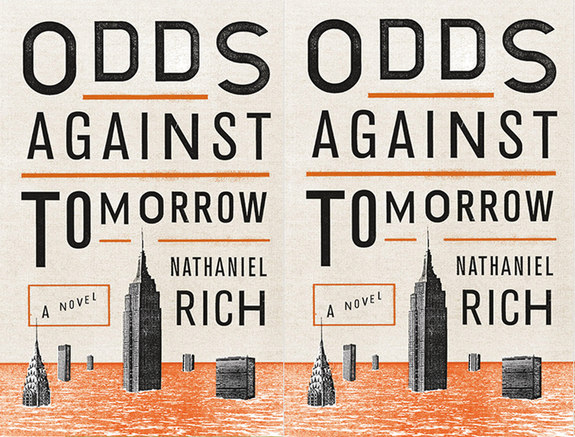 Rm220: You moved to New Orleans while you were writing the book. How did moving to a city that had been decimated by a storm change your approach to writing a book about that topic?

NR: Quite a lot. I rewrote the final third of the novel, which takes place after the hurricane hit, in New Orleans. Seeing the effect—even five, six, seven years after Katrina—that the flooding had on the land, the trauma that it caused for the people who lived here and how long-lasting and persistent it was, and the unusual ways in which it emerged in day-to-day life many years after the storm absolutely affected the way I wrote about New York after the storm in the novel. The community where Mitchell sets up after the storm is a fictionalized version of something like the Lower Ninth Ward, but in New York—it’s wiped clean the way that parts of the Lower Ninth were.

Rm220: Did writing about disaster in a city seem more palpable or real once you got here?

NR: Absolutely. I understand a little more sharply the human stakes involved, the emotional stakes, the trauma, but also the great amount of determination and will that there is to rebuild after a devastating storm. There are things I knew intellectually, but having talked to people and met people who lived through it made it more vivid for me and changed the way I wrote about it, especially in the very final pages of the book.

Rm220: A couple instances in the book explicitly point to the tension between disaster and language. There’s a part where someone’s watching the evening news and thinking that the hurricane is going to be this sort of indescribable phenomenon, but then the reporter just goes through the motions, the laundry list one expects. And then there’s a point where Mitchell and Jane are canoeing through the wreckage and they decide to stop naming things that they see, because doing so intensifies their nightmarish reality. How did you deal with the tension between disaster and language?

NR: A shocking thing about catastrophes is that they can be rendered into mundane stories. There’s something almost traumatic about the way that they can be digested by the news cycle—and even by the way you talk about them in your day-to-day life. Words are insufficient to convey the emotional force and the devastation of a disaster.

Disaster also has its own clichés. Writing about disaster is very challenging, because you have to break through the clichés and the stock images we have in our brains about disasters. I did not want to write a novelistic version of some Hollywood blockbuster. Part of the way to do that is to just keep everything very specific and localized to the character. I tried to stay within Mitchell’s point of view. I think that’s true to how we experience disasters—one doesn’t experience Katrina hitting New Orleans. One has their house flooded, their electricity cut, has to walk through flooded streets. In order to recreate the horror of a situation like that, I needed to move beyond those clichés.

Rm220: I think you did a good job, except for one point in the book. That’s when Mitchell and Jane are in the canoe moving toward what they think will be dry land, but upon nearing their destination they come upon a mob of savage looters. It stuck out to me because people are very sensitive—especially in New Orleans—about this notion of people turning into animals in the wake of disaster, and how that facilitates police oppression and other nasty things. Rebecca Solnit has a whole book about it. People loot, of course, but the “savage looter” has been pretty clearly shone not to be what most people turn into. And it might be a disaster cliché.

NR: That scene takes place in Midtown Manhattan, one of the wealthiest areas of Manhattan. I wanted to write about the desperation that sets in, especially in people who feel that even in the worst-case scenario they’re going to be insulated and fine. I think the cliché would be to set the scene in Bed Stuy—if there were black people in Bed Stuy raiding stores, that would be the cliché, that’s noxious. And I avoided that. The stories of the characters once they get to the FEMA park—of people who come from the outer boroughs and aren’t from Manhattan and have been displaced by the storm—those tend to be the more positive stories that you suggest. The characters in the scene you refer to belong to the Wall Street community, which begins to devour itself. I felt like that was a necessary step in the progression of the story. Mitchell starts off in this very insulated, wealthy Wall Street world and this is the beginning of his path out of that. The first step is to understand that barbarity and desperation can even occur at the higher socioeconomic levels of society.

The other thing is that looting does happen during storms. It would be politically correct to suggest that it doesn’t. Good things happen, but bad things happen, too. That’s humanity.