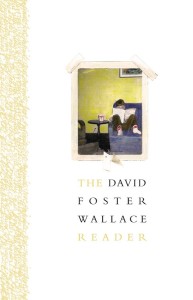 I’ve been on the fence about writing a review of The David Foster Wallace Reader since I received my copy in the mail. I’m fascinated by the monolithic (re)presentation of the late author’s work—it strikes me that Wallace himself would have been very anxious w/r/t the hagiography that has emerged around him—and the book itself is a beautiful, well-designed object, thanks in no small part to a second act by Wallace’s widow Karen Green, whose jacket art is nearly as stunning as the jacket art adorning The Pale King. I was of course eager to reread the essays & stories (slightly less excited about the novel excerpts, but oh well), and I was intrigued if suspicious concerning the critical/editorial afterwords appended throughout the book. These could be usefully illuminating, heavy-handedly worshipful, or just atmospherically superfluous—but I wasn’t getting my hopes up. Anyway, I was conflicted about this book, and also strangely inspired to write something about it, and yet uncertain how to go about getting started on such a task….

But here I’ve said so much already! And I haven’t even really started. Here’s what tipped me over the edge into actually writing about this book: A 1/3-page vertical ad for the book in the latest New Yorker, which leads with a header, in white letters on shit colored brown, tempting us to EXPERIENCE HIS LIFE’S WORK. Is this supposed to be a bad visual pun on Wallace’s story “The Suffering Channel”? Because having just reread that novella-length story, I’ve got to say that this interpretation seems hard to resist—and yet if so, then the publishers have really gone all the way down Wallace’s prognosticated rabbit hole of irony’s function in contemporary consumer culture.

This perhaps unintended inter-paratext aside: knowing even the basics about David Foster Wallace’s life and death (say, if we had read D.T. Max’s biography Every Love Story is a Ghost Story), would we actually want to “experience his life’s work”? Okay, okay, I know this just refers to his writings—in a scandalous reversal of Roland Barthes’s formulation, as it were, from text back to work. We are to behold Wallace’s WORK not as life, not as living, but as settled, as curated—in a word, as dead.

I read the bulk of the book in the bathtub, suffering through a nasty super-cold that took down my whole family over the Thanksgiving break (one of the real modern biological marvels: preschool microbial incubation tanks). So I read Wallace’s words through a pulsing green fog of body aches and phlegm, which is not something I would wish on anyone…but which bizarrely made Wallace’s writing come to life, and seep inside the my own miserable, embodied subjectivity. Also, physically speaking, the book made me work for it: holding it up is a feat in and of itself, as it weighs in at 2.8 pounds, according to Amazon. I’m not exactly describing an idyllic reading situation in this book review.

Don’t get me wrong, though: I’m assigning the book in my David Foster Wallace seminar at Loyola next semester. It’s a great collection of pieces, carefully chosen, and it’s incredibly convenient from a pedagogical standpoint to have all the class’s readings contained in one book. But I’m hardly suggesting that we should start laying the groundwork for The Norton Anthology of David Foster Wallace, Volumes I-VI.

Yet…I do hope that in the future Hachette considers another quite different sort of collection of Wallace’s work—conceived, perhaps, as a pocket book. Call it David Foster Wallace’s Sentences. Imagine it: a small, elegant book of single sentences generously spaced on white pages—the long sentences, the short ones, and the in-between ones. A book that would read like a weird, homeopathic amalgam of haikus from the other side (Western, postmodern, distracted, nervous, etc.). Michael Pietsch, maybe we could discuss this idea?