You are here: Home / Book Review / The Impossible Fairy Tale 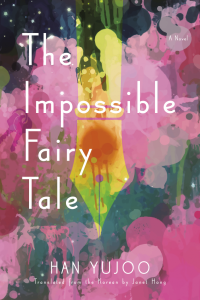 In a moment when we are questioning the authority of narrators both on the page and in the world, Han Yujoo’s novel The Impossible Fairy Tale operates as both an invitation into the psychological horror of art-making and a cautionary tale about who governs our narratives.

The book begins straightforwardly enough: with a classroom populated by students who terrorize each other, physically and emotionally. They play “the fainting game” in which children strangle each other until they cannot breathe. They chat casually about ideal weapons—a fountain pen, for example—to commit murder. They confess to a range of vile and ugly acts through their school-provided private journals. The story then reaches a turning point when the journals are re-distributed one afternoon, and it becomes clear that someone has been re-writing the students’ stories. This act of authorial violation forecasts a major pivot in the middle of the book, but there are clues that the ethics of storytelling is central to the novel from the very first pages. Readers become attuned to the overwhelming sense of premonition that riddles the story’s unfolding at the onset and the regular future-tense interruptions raise immediate questions about the narrator: “Mia must look at the Child. Mia will soon look at her. She will look, even if she doesn’t want to look. Mia is lucky . . . We must continue with Mia’s story. Look at Mia.” There is a sense of dis-ease here on two levels: one, in that the narrator collapses him/herself with the reader through the first-person plural “we”; and two, that the narrator uses imperatives to direct the reader’s action: “Look at Mia,” the narrator demands. Readers begin to understand that here is a narrator who is conscious that he/she is losing control, and the tension in the anxious narration works as a frame story that creates just as much suspense as the plot of the monstrous children in school.

The oscillations in tense become further complicated as the story progresses. In the first mention of a motif that maps over the wider themes of book, the narrator describes Mia watch a planet be demolished on television. “It collapses. It’s collapsing. It has collapsed,” readers are told, thus revealing how the story is caught in time that loops and folds. This is horror at its finest, taking shape in the dissociative children’s eerie behavior as well as in the hiccupped and apprehensive voice that delivers the tale. By the middle of the book readers realize it’s unclear who is in charge and begin to wonder if the narrator is telling the story or the story is using the narrator as a puppet to be told. Importantly, the book will not let us forget that the children’s notebooks are written in pencil. The tentative status of a narrative that is always occupying a space of potential erasure is another way in which Yujoo enacts the unsettling feeling characteristic of both horror and metafiction.

But all that is merely Part I. The repetition of the story collapsing foregrounds the major narrative tension in the second part, where readers experience a revelation: the first half of the narrative was actually the text of a book, and the author of that book serves as the narrator of Part II. This would be enough to serve as an interesting pivot alone, but soon we see how the rules of the world become unsound: Mia, the protagonist of Part I, breaks from the page and pays a visit to the author of her story. The boundary between the real and the imagined, the narrator and the author, and the character on the page and in the world dissolves, echoing the mantra that the story “collapses, is collapsing, has collapsed.”

Other reviewers have describe the formal structure of The Impossible Fairy Tale as a Mobius strip or lemniscate, but it might better summarize Yujoo’s project here to describe the shift as a very strategic upending of the narrative conventions of horror. It cannot be ignored that what happens here is Frankenstein-ian: a body is offered life, but that life is governed, and when the body realizes how little agency it has, the character faces and questions her own creator. Importantly, Yujoo’s move takes this one step further, underscoring how writing fiction is an inherently eerie undertaking, a process by which consciousness is conjured only to be controlled. In this way, Yujoo’s project is saying something new: that every storyteller is both creator of—and also held hostage by—her characters.

By the end—perhaps unsurprisingly, given the narrative acrobatics Yujoo has performed so far—a second person surfaces and we are introduced to “you,” both a character in the book but also the flesh being reading Yujoo’s novel, both of whom, on different planes, stalk the author of the book. At this point, while the inside and the out have long been slipping into and around each other, it is here where the larger, more ontological questions about storytelling and fiction writing surface:

While these questions are never answered, posing them at all firmly situates The Impossible Fairy Tale as a project that feels timeless—these are, after all, the questions braiders of story have been asking from the beginning—and also timely, as the current questions about identity and authority in storytelling are issues at the forefront of current literary discussions. Do we have a right to imagine and understand experiences we have not lived? Or do we have a responsibility to imagine and understand these experiences? Recent discussions about cultural appropriation in the literary world have overwhelmed writers and readers alike, especially in an age of social media where reader response becomes public—indeed, globally available—instantaneously. Such controversies have pervaded conferences and conversations online and in print. For example, Francine Prose’s “The Problem with Problematic,” a New York Review of Books response to the controversy surrounding Laura Moriarty’s speculative young adult novel American Heart, which features a near-future U.S. in which, according to HarperCollins’s website “registries and detainment camps for Muslim-Americans are a reality.” Or John McWhorter’s editorial in The Atlantic in response to The Nation’s publication of an Anders Carlson-Wee poem that features a speaker of Black English. Whether YA or poetry, the question of who gets to tell a story is, now perhaps more than ever, at the forefront of writers’ and readers’ minds.

Yujoo uses these questions as the foundation of a book about, at its core, the dialogic struggle between the creator and the created. Her posing of these questions within the frame of a story itself asks readers to face questions of character representation head-on, empathizing with both. If her book is a cautionary tale, it would seem one lesson we can learn is this: authors are never entirely in charge of the characters they write. Both those characters and the consumers of that material—readers—do much more work to animate a book than an author might be willing to admit. “Every time I see you enact the habits I’ve designed, I feel both an unnameable sense of happiness and unease” the author tells Mia, and in doing so, Yujoo subverts our expectation by asking readers and characters to empathize with authors: for, she seems to say, populating the page with a person is always already a risk.

As if to confirm this, in the final pages we see the author’s world collapse completely when the motifs of bricks and concrete—clear allusions to crafting a concrete character and building with bricks a solid setting—become literalized, morphing the prose into poetic ruins. The tension of the narrator trying to hold up her story while it falls is at once beautiful and unnerving:

It is here where Yujoo leaves us to loiter in the twinned but conflicting space—the impossible space—between the story’s creation and destruction, which always unfold simultaneously. “Each of us carries the mark of all that has ever been written,” the book’s epigraph states, a potent reminder that if writers today are questioning whether they have a right or responsibility to portray the characters they do, those questions are part of an ongoing dialogue with writers of the past and the future.

With prose that is at once lyric and eerie, The Impossible Fairy Tale explores the beauty and horror inherent in the act of creation, reframing how we understand the dynamic between a story and its teller. Alongside Han Kang’s The Vegetarian (2014) and Hye-young Pyun’s The Hole (2017), Yujoo’s surrealist and terrifying short novel packs an intellectual punch, offers a timely message, and suggests South Korean literature will continue to provide some of the most profound and disturbing 21st century psychological horror.

Lindsey Drager’s first two novels won a John Gardner Fiction Prize and a Shirley Jackson Award. Her third book, The Archive of Alternate Endings, is forthcoming from Dzanc this year. Currently, she is an assistant professor at the College of Charleston and the nonfiction editor of Crazyhorse.