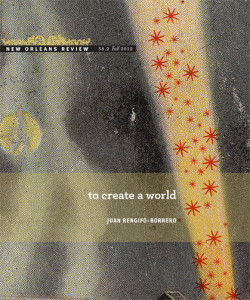 The credibility of a world depends on two or three laws.

alleviates the pain associated to any suffering. Good

illiquidity, saying in general excuses any

miscalculation. If not, the possibilities are infinite.

If so, saying in general, the possibilities are

infinite, will alleviate any suffering.

If nothing else works, to create a plausible world

depends on persuading its population. Making up two or

three laws. Gravity. An exception that confirms any

rule. The possibilities are infinite. Without regard to

limitless legislations it is recommendable to count in

order to convince a world. Any product is better sold in

scarce numbers. One world. A hundred and twenty-eight

population. Say in general, if nothing else works, good

rewarded, it is fair to smile when you barely make it

through the shutting doors. Emulate its inhabitants,

remain unhappy when you make it on time, say in general,

incurable diseases kill. Count if so. Count if not. One

world. Two or three laws. The possibilities are

infinite. If nothing else works.

Juan Rengifo-Borrero lives and works in New York City. “To Create a World” is his first series of poems published in the United States. He holds a Master of Public Administration from Columbia University and was born in Cali, Colombia.