You are here: Home / Book Review / To Live in Autumn 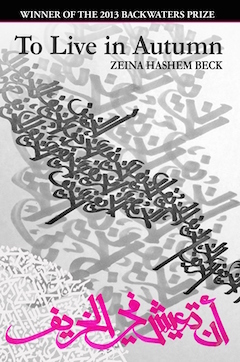 To paraphrase William Carlos Williams, it is difficult to get the news from poems, but people die miserably every day from a lack of what is found there. Zeina Hashem Beck’s debut poetry collection, To Live in Autumn, winner of the 2013 Backwaters Prize, is full of news and history. While Beck acknowledges that so much of the news out of the Middle East is troubling,  her impulse to explore this darkness is balanced by a desire to convey the region’s radiance. In particular, Beck celebrates the people and the streets of Lebanon, her native country, and, to a lesser extent, the United Arab Emirates, her adopted home. In this collection, Beirut, especially, comes alive.

The book’s dedication reads, “To my Beirut,” and the capital of Lebanon reveals itself as the “palimpsest city” of Beck’s youth. The poems’ speakers remember dancing in nightclubs, walking sun-soaked streets, inhaling the scents of cigarettes and rain and coffee. Indeed, coffee appears so frequently in the book it is very nearly a character of its own. The Hamra district, full of university students and trendsetters, features prominently. Beck devotes the first section of the collection to a largely loving portrait of a city that is ingrained in Western imaginations as a site of conflict, bombings, and the Hezbollah, a political party classified by the United States as a terrorist organization. Cars in the city “wade through the flooded streets / like islands moved by longing,” and a waitress gives the speaker and her friends extra lemon in their lentil soup and “tells [them] to smile smile smile.” Still, Beck doesn’t shy away from the city’s contradictions. Although the book’s opening poems celebrate a lively, pulsing Beirut, danger lurks at the edges. The streets are often strewn with garbage. A woman rolling grape leaves is “waiting for her husband / to return from a Syrian prison.”

The second section of the book, “Portrait of a Woman with Cigarette,” features Beirut’s citizens. With its emblematic name, Bliss Street becomes the center point for snapshot poems, which Beck uses to capture descriptions of the complex human faces who’ve experienced decades of war. Some of the strongest poems in the book are found here. Several retell the story of Ali, a homeless man described as “a god who’s lost / track of the days” and who later dies of exposure. In “Prayer,” Beck offers perhaps the best manifestation of a recurring figure in the book: a young woman caught at the crossroads of Muslim law and Western influence. As she climbs the “university stairs”:

With one crisp circular move

she removed her blue veil,

placed it on her mouth as if

to soak up the colors on her lips,

blossom on its fabric,

wrapped it around her neck,

whipped the air with her long brown hair

whipped the air with her long brown hair

whipped the air with her long brown hair[.]

This passage captures the intense radiance of sensory detail and deft symbolism, two elements that make Beck’s book compelling. The repetition, which threads through the book, hybridizes the English with Arabic rhythms. “In our language,” one of Beck’s characters notes, “we repeat and repeat.” The woman’s desire “to shed the veils / under the veil” could be understood as the book’s own project.

The second half of the book deals more explicitly with violence and war. Beck lays her country’s past alongside recent developments in the Middle East: the Egyptian Revolution of 2011, the Boston Marathon bombing of 2013, and, of course, 9/11. These poems differ in tone from the rest of the book. Though they are few in number, they are heavy and central, the unspoken heart beneath the surface of Beck’s previous celebrations of Lebanon. The speaker is by turns broken-hearted, angry, optimistic, and resigned. In “Peace: A Definition,” Beck writes:

with a flag in her hands.

You were telling yourself

the world can begin or end

with the definition of peace.

You were thinking about the words

This sense of limbo is also captured in the recurring theme of autumn, which appears in the collection’s title and throughout the book. The poem “We Who Have Decided to Live in Autumn” is followed by “Beirut, September 2012,” a month when a deadly car bomb killed eight people in that city. The speaker comes to terms with the fact that Beirutis must live in “this un-season we’ve learned to savor, / this infinite in-betweenness.”

In the collection’s final section, the speaker is  an expatriate living in Dubai seeing her native city from a remove and with an adult perspective: “I knew a city, / and I didn’t need to summon it, / for it inhabited me.” She talks to friends back home, who give her the news: shooting in Tripoli, Syrian refugees filling the streets. The poem “Spring,” which closes the book, is a play on the season and on the Arab Spring—the wave of revolutions that spread across the Middle East between 2011 and 2013 and resulted, in many cases, in violence and instability. These poems recognize possibility, but Beck does not falsely inflate her writing with hope. The book ends with a confrontation of her previous romanticization of Beirut. If spring is to come, Beck is clear-eyed enough to admit, flowers may grow from blood in “the streets instead of rain.” Still, I can’t help but be glad that “spring” is the word that closes the book: Beck’s greatest gift is to show us that beauty and tenderness can never be completely destroyed.