Turtle head, poke out of shell
and water, barely send out
ripples. Arms outstretched, slowly
tread water, breathe in
a deep, turtle breath,
wade shallow
near, and on, and over
the surface; you are everywhere.

Acorn in the years-ago ground, 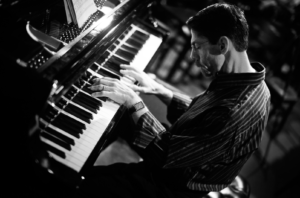 Fred Hersch is an American jazz pianist and educator. He has performed solo and led his own groups, including the Pocket Orchestra consisting of piano, trumpet, voice, and percussion. He was the first person to play weeklong engagements as a solo pianist at the Village Vanguard in New York City. He has recorded more than 70 of his jazz compositions. Hersch has been nominated for several Grammy Awards.